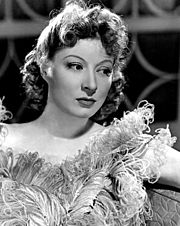 After many stage appearances, Greer Garson was signed to a contract with MGM. She became one of the studio's top ten box office draws. Garson received seven Academy Award nominations and she won the award for Mrs. Miniver (1942). After the 1940s, her career declined.

Garson moved to the United States and in 1951 became an American citizen. She died from heart failure at Presbyterian Hospital in Dallas, Texas, on 6 April 1996 at the age of 91.

All content from Kiddle encyclopedia articles (including the article images and facts) can be freely used under Attribution-ShareAlike license, unless stated otherwise. Cite this article:
Greer Garson Facts for Kids. Kiddle Encyclopedia.