William Clark Gable (February 1, 1901 – November 16, 1960) was an American film actor and military officer, often referred to as "The King of Hollywood" or just simply as "The King". Gable began his career as a stage actor and appeared as an extra in silent films between 1924 and 1926, and progressed to supporting roles with a few films for Metro-Goldwyn-Mayer in 1931. The next year, he landed his first leading Hollywood role and over the next three decades he became a leading man in more than 60 motion pictures.

On February 8, 1960, Gable received a star on the Hollywood Walk of Fame for his work in motion pictures, located at 1608 Vine Street.

Gable won an Academy Award for Best Actor for It Happened One Night (1934), and was nominated for leading roles in Mutiny on the Bounty (1935) and for his arguably best-known role as Rhett Butler in the epic Civil War drama Gone with the Wind (1939).

Gable appeared opposite some of the most popular actresses of the time. Joan Crawford was his favorite actress to work with, and she was partnered with Gable in eight films. Myrna Loy worked with him seven times, and he was paired with Jean Harlow in six productions. He also starred with Lana Turner in four features, and with Norma Shearer and Ava Gardner in three each. Gable's final film, The Misfits (1961), united him with Marilyn Monroe (also in her last screen appearance). Gable is considered one of the most consistent box-office performers in history, appearing on Quigley Publishing's annual Top Ten Money Making Stars Poll 16 times. He was named the seventh-greatest male star of classic American cinema by the American Film Institute.

Gable was married five times and had two children.

Gable's acting coach, Josephine Dillon — a theater manager in Portland – was 17 years his senior. She paid to have his teeth repaired and his hair styled. She guided him in building up his chronically undernourished body, and taught him better body control and posture. She spent considerable time training his naturally high-pitched voice, which he slowly managed to lower, to gain better resonance and tone. As his speech habits improved, his facial expressions became more natural and convincing. After a long period of training, Dillon considered him ready to attempt a film career.

Gone with the Wind

Despite his reluctance to play the role, Gable is best known for his performance in Gone with the Wind (1939), for which he gained a Best Actor Oscar nomination. 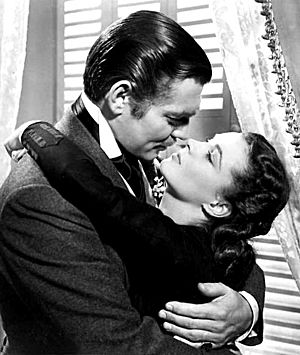 Gable and Vivien Leigh strike an amorous pose in Gone with the Wind, 1939

Butler's last line in Gone with the Wind, "Frankly, my dear, I don't give a damn," is one of the most famous lines in movie history.

The Washington Evening Star reported that Gable took a physical examination at Bolling Field on June 19, preliminary to joining the service.

"Mr. Gable, it was learned from a source outside the war department, conferred with Lieutenant General H. H. Arnold, head of the air forces yesterday." the Star continued. "It was understood that Mr. Gable, if he is commissioned, will make movies for the air forces. Lieutenant Jimmy Stewart, another actor in uniform, has been doing this."

Gable had earlier expressed an interest in officer candidate school, but he enlisted on August 12, 1942, with the intention of becoming an enlisted aerial gunner on a bomber. MGM arranged for his studio friend, the cinematographer Andrew McIntyre, to enlist with him and accompany him through training.

Gable spent most of 1943 in England at RAF Polebrook with the 351st Bomb Group. Gable flew five combat missions, including one to Germany, as an observer-gunner in B-17 Flying Fortresses between May 4 and September 23, 1943, earning the Air Medal and the Distinguished Flying Cross for his efforts. 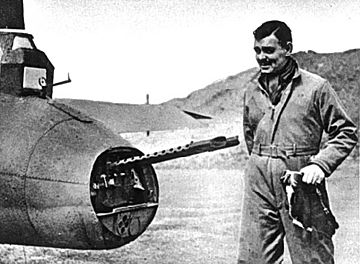 Clark Gable with an 8th Air Force Boeing B-17 Flying Fortress in England, 1943

In May 1944, Gable was promoted to major. He hoped for another combat assignment, but when the invasion of Normandy came and went in June without any further orders, Gable was relieved from active duty as a major on June 12, 1944, at his request, since he was over-age for combat. His discharge papers were signed by Captain (later U.S. President) Ronald Reagan.

Adolf Hitler favored Gable above all other actors. During World War II, Hitler offered a sizable reward to anyone who could capture and bring Gable to him unscathed.

He made good use of his wartime experiences in the movie Command Decision (1948), playing a World War II brigadier general who supervised bombing raids over Germany. 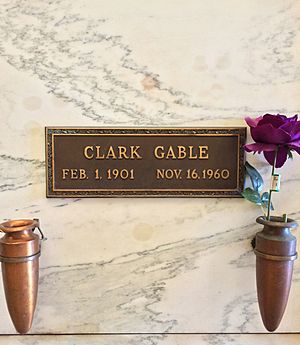 Crypt of Clark Gable, in the Sanctuary of Trust of the Great Mausoleum, Forest Lawn Glendale.

On November 6, 1960, Gable was sent to Hollywood Presbyterian Medical Center in Los Angeles, California, where doctors found that he had suffered a heart attack. Newspaper reports the following day listed his condition as satisfactory. By the morning of November 16 he seemed to be improving. But he died that evening at age 59 from an arterial blood clot.

Gable is known to have appeared as an extra in 13 films between 1924 and 1930. He then appeared in a total of 67 theatrically released motion pictures, as himself in 17 "short subject" films, and he narrated and appeared in a World War II propaganda film entitled Combat America, produced by the United States Army Air Forces.

In the film Broadway Melody of 1938, Judy Garland (aged 15) sings "You Made Me Love You" while looking at a composite picture of Gable. The opening lines are: "Dear Mr. Gable, I am writing this to you, and I hope that you will read it so you'll know, my heart beats like a hammer, and I stutter and I stammer, every time I see you at the picture show, I guess I'm just another fan of yours, and I thought I'd write and tell you so. You made me love you, I didn't want to do it, I didn't want to do it..."

Bugs Bunny's nonchalant carrot-chewing standing position, as explained by Chuck Jones, Friz Freleng, and Bob Clampett, originated in a scene in the film It Happened One Night, in which Clark Gable's character leans against a fence, eating carrots rapidly and talking with his mouth full to Claudette Colbert's character.

All content from Kiddle encyclopedia articles (including the article images and facts) can be freely used under Attribution-ShareAlike license, unless stated otherwise. Cite this article:
Clark Gable Facts for Kids. Kiddle Encyclopedia.