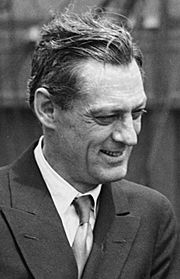 Lionel Barrymore (Lionel Herbert Blythe, April 28, 1878 – November 15, 1954) was an American movie, television, stage, and radio actor who won an Academy Award in 1931. He is known for his roles in A Free Soul, The Little Colonel, It's a Wonderful Life, Young Dr. Kildare, and in David Copperfield. His brother was actor John Barrymore and his grandniece is actress Drew Barrymore.

Barrymore was born on April 28, 1878 in Philadelphia, Pennsylvania. He studied at the Episcopal Academy. Barrymore was married to Doris Rankin from 1904 until they divorced in 1923. Then he was married to Irene Fenwick from 1923 until they divorced in 1936. He had two daughters with Rankin, both died early. He had a fatherly love with Jean Harlow and treated her as if she was his own daughter. Barrymore died on November 15, 1954 in Van Nuys, California from a heart attack, aged 76.

All content from Kiddle encyclopedia articles (including the article images and facts) can be freely used under Attribution-ShareAlike license, unless stated otherwise. Cite this article:
Lionel Barrymore Facts for Kids. Kiddle Encyclopedia.