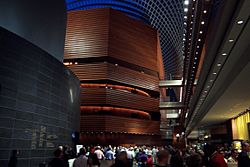 Kimmel Center for the Performing Arts, interior at night

The Philadelphia Orchestra is an American orchestra. It is based in Philadelphia, Pennsylvania. It does over 130 subscription concerts a year from September to May. In the summer the Orchestra performs an outdoor session for a month. It originally gave concerts at the Academy of Music. The orchestra was founded in 1900. It has performed at the Kimmel Center for the Performing Arts since 2001.

All content from Kiddle encyclopedia articles (including the article images and facts) can be freely used under Attribution-ShareAlike license, unless stated otherwise. Cite this article:
Philadelphia Orchestra Facts for Kids. Kiddle Encyclopedia.