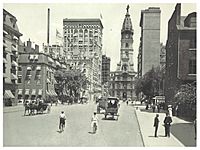 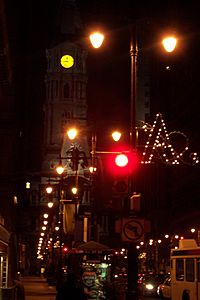 Broad Street at night along the "Avenue of the Arts" section, looking north towards City Hall, 2005. 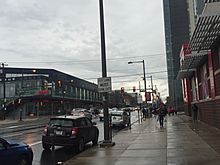 Broad Street in the Cecil B. Moore area near Temple University 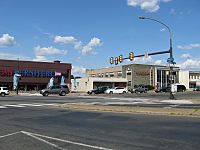 Broad Street runs north–south, in between 13th Street and 15th Street, containing what would otherwise be known as 14th Street in the Philadelphia grid plan. It is interrupted by Philadelphia City Hall, which stands where Broad and Market Street would intersect in the center of the city. The streets of Penn Square, Juniper Street, John F. Kennedy Boulevard, and 15th Street form a circle around City Hall at this point. It is one of the earliest planned streets in the United States, and is listed on the National Register of Historic Places as a continuous north-south street, planned by surveyor Thomas Holme and developed for Philadelphia in 1681 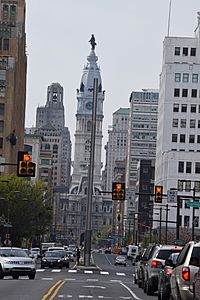 Broad Street has gone through various changes since its beginnings in Colonial America. Thomas Holme introduced the first geographical plan of the city to William Penn in 1687. Composing of a center square, Holme designed the street to be roughly 100 feet (30 m) across and 13 miles (21 km) long. Penn intended that the center square would eventually be home to Philadelphia's City Hall. During the American Revolution, the street was often settled by troops moving in and out of the city. As the city's population grew, Broad was extended both north to Vine and south to Dickinson, eventually reaching the Delaware Waterfront, where today's Philadelphia Naval Shipyard stands. It remains Philadelphia's longest straightaway and one of the longest urban boulevards in the United States.

During the early stages of the 19th century, Broad Street was home to many wealthy residents, especially around the Rittenhouse square area. Homes were designed in Victorian and Gothic styles. South Broad became center for the fine arts with the establishment of the Academy of Music in 1857. A Masonic Temple, The Pennsylvania Academy of the Fine Arts and the Adelphi Theater were also built during the same time period. Banks and offices grew in number around center city as well as high rise structures. The corner of Spring Garden housed Baldwin Locomotive Works founded by Matthias Baldwin in 1825. Baldwin's company was one of the biggest steam locomotive producers before the transition to diesel powered trains. Broad Street's biggest addition came with the construction of City Hall intersecting Broad and Market. With the progression of the Industrial Revolution Philadelphia became a center for trade and commerce. Transportation growth gained prominence with the construction of the Broad Street Station in 1881. Social life dominated the street during the second half of the 19th century. Elaborate hotels such as the Divine Lorraine and the Majestic were centers for night life. Standing over 10 stories tall the Lorraine was one of the tallest residential structures in Philadelphia. Private clubs such as the Columbia and Mercantile were popular during the Gilded Age.

At the turn of the 20th century, Broad Street transformed from a bustling boulevard to a cultural magnet for music and the arts. January 1, 1901 introduced the very first Mummers Day parade which has become a staple of Philadelphia culture. Jazz and gospel gained popularity at the grassroots level due primarily to the Great Migration of the early 1900s. One such place for Jazz and Blues music was the Uptown Theater, built in 1927. By the 1950s Broad Street residential areas had been replaced with skyscrapers as well as the newly developed Penn Center. Since the 70s the street has undergone various city renovations. With $100 million in public funds Broad has received new lighting and streetscaping, restored theaters as well as new restaurants and cafes. Lamp post fixtures have been improved as well as sidewalk pavements and subway entrances. In 2015 Philadelphia Mayor, Michael Nutter, introduced a $8.7 million project to brighten North Broad with 41 stainless steel light masts.

Broad Street is home to several Philadelphia cultural landmarks. During the administration of Mayor Ed Rendell, Broad Street between Spruce and Market Streets, became known as the Avenue of the Arts, where it is home to art galleries, the Academy of Music, and the Kimmel Center. North of City Hall is the Pennsylvania Academy of the Fine Arts.

The South Philadelphia Sports Complex, near Broad's south end along Southern Boulevard Parkway, is the site of Citizens Bank Park, Lincoln Financial Field, and the Wells Fargo Center. Demolished sports facilities located in this area were John F. Kennedy Stadium, the Spectrum, and Veterans Stadium. As a result, the Philadelphia Flyers are nicknamed the "Broad Street Bullies".

South of the sports complex and interchanges with the Schuylkill Expressway (Interstate 76) and Interstate 95, Broad Street has its southern terminus in the former Philadelphia Naval Shipyard.

The former offices for The Philadelphia Inquirer and Philadelphia Daily News newspapers are on Broad Street just north of City Hall and the former PA State Building is at the intersection with Spring Garden Street. Most recently, the Public School District Administration relocated between these two landmarks. Also located on North Broad at its intersection with Fairmount Avenue is the historic Divine Lorraine Hotel. Farther north, Broad passes through the campus of Temple University. Included on Temple's campus is the performing arts center, established in 1891. Once a Baptist temple, it has now become a prime part of the "Avenue of the Arts."

Where Broad Street intersects with Clearfield Street in North Philadelphia is the exact location of the 40th Parallel.

At the corner of Broad and W. Glenwood Ave is the former personal gym of heavyweight champion boxer, Joe Frazier. Having lived atop the gym for several years, it has now been turned into a furniture store.

Broad Street often serves as the main parade route for Philadelphia sports championship parades, most recently for the Eagles Super Bowl LII victory. During the Phillies 2008 World Series victory parade, an estimated 2 million people lined Broad Street. The largest gathering for a championship parade was for the Flyers in 1974.

One of the busiest streets in the country, Broad Street is shut down for the annual 10-mile (16 km) Broad Street Run. Passing by some of Philadelphia's most famous landmarks, the course averages over 35,000 participants a year. Additionally, the section of Broad Street from near Oregon Avenue (Marconi Plaza) to City Hall, in South Philadelphia and Center City, is the traditional location of the Mummers Parade on New Years Day. 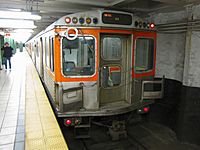 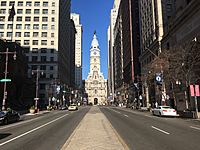 All content from Kiddle encyclopedia articles (including the article images and facts) can be freely used under Attribution-ShareAlike license, unless stated otherwise. Cite this article:
Broad Street (Philadelphia) Facts for Kids. Kiddle Encyclopedia.