The Wells Fargo Center is a multi-use indoor arena in Philadelphia, Pennsylvania. It was called Spectrum II before it was built. It has previously been called the CoreStates Center, First Union Center and Wachovia Center.

The Wells Fargo Center is at the southwest corner of the South Philadelphia Sports Complex. Some of the buildings there are Lincoln Financial Field, Citizens Bank Park, and Xfinity Live!. 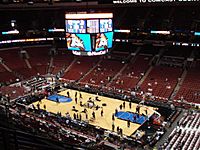 Wells Fargo Center before a 76ers game on the old floor design.

The Center officially seats 20,318 for NBA and NCAA basketball games and 19,537 for NHL hockey and indoor ("box") NLL lacrosse. With more standing-room areas available in luxury and club-box suites, the total paid capacity is actually more than that. The Center has 126 luxury suites, 1,880 club-box seats, and a many restaurants and clubs (both public and private) available for use by patrons. The offices, studios, and production facilities of Comcast SportsNet Philadelphia are all located in the facility.

On June 9, 2010, the Center set the record for the highest attendance for an indoor hockey game in the commonwealth of Pennsylvania (20,327) when the Flyers lost Game 6 of the 2010 Stanley Cup Finals to the Chicago Blackhawks. The Center also set a record for the highest attendances for a college basketball game in the commonwealth of Pennsylvania on February 13, 2006, when Villanova University played and defeated the #1 ranked University of Connecticut before a crowd of 20,859.

On August 1, 2006, Comcast Spectacor announced it would add a new center-hung scoreboard to replace the original one made by Daktronics. The new scoreboard, manufactured by ANC Sports is like other scoreboards in new NBA & NHL arenas. Another linear LED display lining the entire arena was also added between the suite and mezzanine levels. Other renovations for the Center's ten-year anniversary included upgrading the suites with more flat screen TV's, as well as changing ticket providers from Ticketmaster to New Era Tickets, which is owned by Comcast Spectacor.

The capacity for 76ers games:

The capacity for Flyers games:

All content from Kiddle encyclopedia articles (including the article images and facts) can be freely used under Attribution-ShareAlike license, unless stated otherwise. Cite this article:
Wells Fargo Center (Philadelphia) Facts for Kids. Kiddle Encyclopedia.