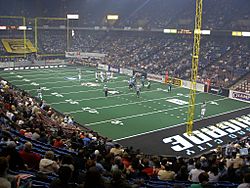 Unlike what people in this league call the outdoor league (the NFL), Arena football is played in an smaller arena. Arena Football is played with only 8 players on a team, not 11 like the NFL.

The Arena Football League has had many teams join and leave the league. Every year, there has been at least one team which did not play with the same name as the year before.

All content from Kiddle encyclopedia articles (including the article images and facts) can be freely used under Attribution-ShareAlike license, unless stated otherwise. Cite this article:
Arena Football League Facts for Kids. Kiddle Encyclopedia.