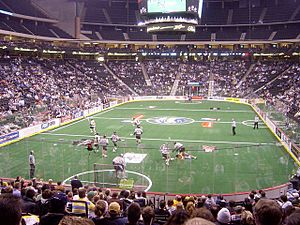 The National Lacrosse League (abbreviated as NLL) is an indoor lacrosse league in North America. It has five teams in the United States and four in Canada. Its season is during the winter and spring. Each team plays 18 games during the regular season.

The following teams are in the league, which is divided into two divisions:

All content from Kiddle encyclopedia articles (including the article images and facts) can be freely used under Attribution-ShareAlike license, unless stated otherwise. Cite this article:
National Lacrosse League Facts for Kids. Kiddle Encyclopedia.