Hoffman Estates is a village in Illinois, United States. The village is located primarily in Cook County with a small section in Kane County. It is a suburb of Chicago. As of the 2010 census, the village population was 51,895. The village was incorporated in 1959.

The village now serves as the headquarters location for the Sears Holdings Corporation, the Midwest headquarters for AT&T, and the American headquarters for Mori Seiki. The village owns the Sears Centre, home of the Chicago Slaughter of the Indoor Football League and the Windy City Bulls of the NBA D-League. In 2009, the village hosted the Heartland International Tattoo, one of the largest music and dance festivals of its kind in the Midwest. 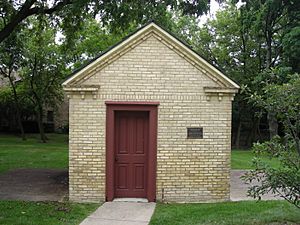 In 1958, the Northwest Tollway opened, making the village more attractive to Chicago commuters. Beginning in 1961, the first land north of the tollway was annexed to the village of Hoffman Estates. Some 2,000 acres (8.1 km2) were annexed by 1962, including the areas that are now Winston Knolls, Westbury and the Paul Douglas Forest Preserve. The annexations more than doubled the incorporated land area.

The opening of the Woodfield Mall to the east in 1971 made the area a major business center. An attempt to change the name of the village to East Barrington was made in the early 1980s but failed upon a residential vote.

In the 1990s, the Prairie Stone Business Park began development. This expansive 780-acre (3.2 km2) master planned multi-purpose business park is bounded by Illinois Route 59 on the east, Interstate 90 on the south, Illinois Route 72 on the north, and Beverly Road on the west. The business park came to fruition in 1993 when Sears, Roebuck and Company relocated from the Sears Tower in Chicago to a sprawling headquarters in the northwest part of Prairie Stone. That was followed in 1995 by Indramat and Quest International opening facilities in the park. Throughout the 1990s, a health & wellness center and child care facility were developed, as well as other smaller office buildings and a branch of Northern Illinois University. Development of the business park is still ongoing, and recent additions in the 2000s include the 11,000-seat Sears Centre arena, office buildings for Serta, WT Engineering, I-CAR, and Mary Kay, Cabela's outdoor outfitters store, a 295-room Marriott hotel, and the 400,000-square-foot (37,000 m2) Poplar Creek Crossing Retail Center, which is anchored by Target and numerous other big-box retailers. Future development will include further office buildings and retail development, Sun Island Hotel and Water Park, an amphitheater, restaurants, and a Metra Star Line rail station.

In the fall of 2016, papers and artifacts from President Barack Obama's administration began to arrive in town, where they are being stored in a building on Golf Road. The site is their temporary home while construction takes place on the Obama Presidential Library in Jackson Park, Chicago, and is not open to the public.

There were 17,034 households, with the average household size of 2.89 individuals per household while the average family size was 3.39, out of which:

The median age was 34 years with variances of:

The racial makeup of the village was:

All content from Kiddle encyclopedia articles (including the article images and facts) can be freely used under Attribution-ShareAlike license, unless stated otherwise. Cite this article:
Hoffman Estates, Illinois Facts for Kids. Kiddle Encyclopedia.