Inverness is a suburban village in Cook County, Illinois, United States. The population was 7,399 at the 2010 census. 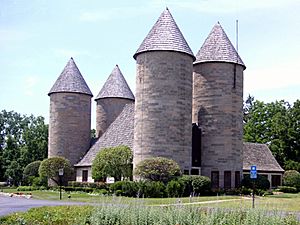 The Inverness area was first settled in 1836 by George Ela and became known as Deer Grove. After surveying the township area, in 1840 the US government offered land in the area for $1.25 per acre. By 1854, rail service was established to Deer Grove, and in 1859 the line was incorporated into the Chicago and North Western Railway system. The Inverness area was now easily accessible to Chicago. The frontier had been opened.

In 1926, Mr. Arthur T. McIntosh, one of Chicago's leading land developers, bought the Temple farm and house, which was originally built by Ralph Atkinson. It was the first of eleven parcels to be acquired by him. These lands, combined with the acquisition of the Cudahy Company Golf Course, comprised 1,500 contiguous acres (6,100,000 m2) for development. With the area under McIntosh's control, it became known as Inverness, after the McIntosh clan home in Scotland.

An important person during this early development was Way Thompson, who preserved the natural beauty of the area by laying out the road system to take advantage of the rolling land and by subdividing lots to conform to natural contours. A minimum lot size of 1-acre (4,000 m2) was established. Thompson also approved all house plans and where they were located on the lots. The first ten homes were even decorated by his wife, Barbara. The first new homes were occupied by 1939. These homes were mostly situated around the edge of the Inverness Golf Club and were designed to be affordable to young couples. They were priced from $9,500 to $20,000. McIntosh built the first 20 homes. After that, the homes were custom built for individuals who purchased lots from McIntosh.

Construction in Inverness was halted during World War II. During the early post-war years, the McIntosh Company had complete control over the sale of lots as well as the resale of homes. Placement of homes was carefully controlled to protect the character of the community.

In 1962, Inverness was incorporated as a village to be governed by a president and board of trustees. The first meeting of the village board was July 5, 1962 and was held at the Field House, which was then at the western edge of the village. In the spring of 1977 the Village Hall was relocated to a 100-year-old farmhouse on Palatine Road. It was again relocated in 1985 to its present location at the Four Silos, which has become a famous landmark and gateway to the community.

During the 1970s and '80s, the village continued to grow at a pace that exceeded earlier predictions. Homes became larger and styles were more varied. It was also during this period that the village annexed large areas of existing homes in unincorporated Cook County, which laid the foundation for further annexations to the west, which continued to expand the village limits to what they are today. Williamsburg Village, the only business development in Inverness, was started in 1981.

There were 2,312 households out of which 36.3% had children under the age of 18 living with them, 83.4% were married couples living together, 3.8% had a female householder with no husband present, and 11.7% were non-families. 9.7% of all households were made up of individuals and 4.7% had someone living alone who was 65 years of age or older. The average household size was 2.91 and the average family size was 3.12.

Inverness ranks 63rd on the list of highest-income places in the United States, with nearby North Barrington, South Barrington, and Barrington Hills also making the list.

All content from Kiddle encyclopedia articles (including the article images and facts) can be freely used under Attribution-ShareAlike license, unless stated otherwise. Cite this article:
Inverness, Illinois Facts for Kids. Kiddle Encyclopedia.