Willis Tower is a skyscraper in Chicago, Illinois. Sears, Roebuck and Company paid for it to be built in August 1970. The building was finished in 1973. It was the tallest building in the world from 1973 to 1996. It has 110 levels. From the ground to the roof it is 442 meters (1,450 feet) tall. It was designed by Fazlur Khan and Bruce Graham.

Willis Tower is the second-tallest building in the United States. It is the eighth-tallest freestanding structure in the world. It is the second tallest skyscraper in the Americas. It is one of the most popular tourist destinations in Chicago. More than one million people visit its observation deck every year.

Until July 16, 2009, the building was called Sears Tower. It was renamed after the Willis Group bought it. 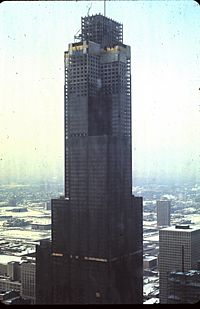 Then-Sears Tower during its construction, c. 1973

In 1969, Sears, Roebuck & Company was the largest retailer in the world. It had thousands of workers in offices in the Chicago area. Sears managers decided to put all of those workers into one building. They wanted 3,000,000 square feet (280,000 square meters) of space. Sears hired architects Skidmore, Owings & Merrill (SOM) to design one of the largest office buildings in the world. Architect Bruce Graham and structural engineer Fazlur Khan designed the building.

Sears and the City of Chicago approved the design. Steel was transported from South Chicago. The first steel was put in place in April 1971. The tower was completed in May 1973. It cost about US$150 million to build. That is equivalent to $800 million in 2014.2018

Before Willis Tower was completed, the tallest building in the world was the World Trade Center. In 1996, the Petronas Twin Towers in Kuala Lumpur, Malaysia became the world's tallest buildings.

The building's name was changed to Willis Tower in July 2009 after the Willis Group bought the skyscraper. Time magazine called the name change one of the top 10 worst corporate name changes. An online petition was created to change their decision. The naming rights issue continued into 2013. It began when a news reporter of the Chicago Tribune said in 2013 that "We're stubborn about such things. This month marked four years since the former Sears Tower was re-christened Willis Tower, and the new name has yet to stick."

In 2015 the Blackstone company bought the building. In 2017 it began an extensive repurposing of the lower part of the building.

The Willis Tower, compared to other well-known skyscrapers

Skidmore architects designed Willis Tower to have large floors of 55,000 square feet (5,100 square meters) in the lower part of the building. They got the idea for the design from an advertisement for a package of cigarettes.

From the ground to the top of the taller antenna, Willis Tower is 1,729 feet (527 meters) tall. It leans about 4 inches (10 centimeters) towards the west because of the unequal loads on its foundation. Willis Tower is the second tallest skyscraper in North America. The observatory elevators in the tower are the fastest in the world at 1,600 feet (490 meters) per minute. With clear weather, four states can be seen from the observation deck: Michigan, Indiana, Illinois, and Wisconsin. 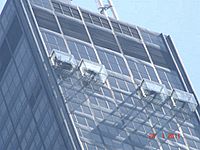 The skydeck from outside the tower

Willis Tower has an observation deck. It is called the Skydeck. It opened on June 22, 1974. It is on the 103rd floor of the building. It is 1,353 feet (412 meters) high. It is one of the most famous tourist attractions in Chicago. The observation deck is the highest public viewing area in the United States. Tourists on the Skydeck can feel the building moving on windy days. They can see the plains of Illinois and across Lake Michigan. Elevators take tourists to the top in about 60 seconds. People on the elevator can feel air pressure changes during the ride.

In January 2009, Willis Tower's owners began making major changes to the Skydeck. They added retractable glass balconies. The balconies extend about 4 feet (1.2 meters) from the tower. They allow visitors to look through the floor to the street below. The boxes can hold up to 5 short tons (4.5 metric tons) of weight. They were opened to the public on July 2, 2009.

The building has been given ENERGY STAR certification by the U.S. Environmental Protection Agency (EPA). This is for being in the top quarter of buildings of its type in the U.S. in terms of energy efficiency.

All content from Kiddle encyclopedia articles (including the article images and facts) can be freely used under Attribution-ShareAlike license, unless stated otherwise. Cite this article:
Willis Tower Facts for Kids. Kiddle Encyclopedia.