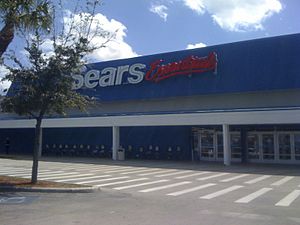 Sears, Roebuck and Company, usually called Sears, is a department store chain with about 600 stores in the United States. The first store opened in 1906. It was the biggest retailer in the country until Walmart had more sales in October 1989.

All content from Kiddle encyclopedia articles (including the article images and facts) can be freely used under Attribution-ShareAlike license, unless stated otherwise. Cite this article:
Sears Facts for Kids. Kiddle Encyclopedia.