Murfreesboro is a city in and the county seat of Rutherford County, Tennessee. The population was 108,755 according to the 2010 census, up from 68,816 residents certified in 2000. In 2014, census estimates showed a population of 120,954. The city is the center of population of Tennessee and is part of the Nashville metropolitan area, which includes thirteen counties and a population of 1,757,912 (2013). It is Tennessee's fastest growing major city and one of the fastest growing cities in the country. Murfreesboro is also home to Middle Tennessee State University, the largest undergraduate university in the state of Tennessee, with 22,729 total students as of fall 2014.

In 1811, the Tennessee State Legislature established a county seat for Rutherford County. The town was first named "Cannonsburgh" in honor of Newton Cannon, then Rutherford County's member of the state legislature, but it was soon renamed "Murfreesboro" for Revolutionary War hero Colonel Hardy Murfree. Author Mary Noailles Murfree was his great-granddaughter.

As Tennessee settlement expanded to the west, the location of the state capital in Knoxville became inconvenient for most newcomers. In 1818, Murfreesboro was designated as the capital of Tennessee. Eight years later, however, it was itself replaced by Nashville.

On December 31, 1862, the Battle of Stones River, also called the Battle of Murfreesboro, was fought near the city between the Union Army of the Cumberland and the Confederate Army of Tennessee. This was a major engagement of the American Civil War, and between December 31 and January 2, 1863, the rival armies suffered a combined total of 23,515 casualties. It was the bloodiest battle of the war by percentage of casualties.

Following the Confederate retreat after the drawn Battle of Perryville in central Kentucky, the Confederate army moved through East Tennessee and then turned northwest to defend Murfreesboro. General Braxton Bragg's veteran cavalry successfully harassed Union General William Rosecrans' troop movements, capturing and destroying many of his supply trains. However, they could not completely prevent supplies and reinforcements from reaching Rosecrans. Despite the large number of casualties, the battle was inconclusive. Nevertheless, it is usually considered a Union victory, since afterwards General Bragg retreated 36 miles (58 km) south to Tullahoma. Even so the Union army did not move against Bragg until a full six months later in June 1863. The battle was significant since it did provide the Union army with a base to push the eventual drive further south, which allowed the later advances against Chattanooga and Atlanta. These eventually allowed the Union to divide the Eastern and Western theaters, followed by Sherman's March to the Sea. The Stones River National Battlefield is now a national historical site.

General Rosecrans' move to the south depended on a secure source of provisions, and Murfreesboro was chosen to become his supply depot. Soon after the battle, Brigadier General James St. Clair Morton, Chief Engineer of the Army of the Cumberland, was ordered to build Fortress Rosecrans, some 2 miles (3.2 km) northwest of the town. The fortifications covered about 225 acres (0.91 km2) and were the largest built during the war. Fortress Rosecrans consisted of eight lunettes, four redoubts and connecting fortifications. The Nashville and Chattanooga Railroad and the West Fork of the Stones River both passed through the fortress, while two roads provided additional transportation.

The fort's interior was a huge logistical resource center, including sawmills, warehouses, quartermaster maintenance depots, ammunition magazines, and living quarters for the 2,000 men who handled the operations and defended the post. The fortress was completed in June 1863, and only then did Rosecrans dare to move south. The fortress was never attacked, in part because the Union troops held the town of Murfreesboro hostage by training their artillery on the courthouse. Major portions of the earthworks still exist and have been incorporated into the battlefield site.

Murfreesboro had begun as a mainly agricultural community, but by 1853 the area was home to several colleges and academies, gaining the nickname the "Athens of Tennessee". Despite the wartime trauma, the town's growth had begun to recover by the early 1900s, in contrast to other areas of the devastated South.

World War II resulted in Murfreesboro diversifying into industry, manufacturing, and education. Growth has been steady since that time, creating a stable economy.

Murfreesboro has enjoyed substantial residential and commercial growth, with its population increasing 123.9% between 1990 and 2010, from 44,922 to 100,575. The city has been a destination for many immigrants leaving areas affected by warfare; since 1990 numerous Somalis and Kurds from Iraq have settled here. The city has also become more cosmopolitan by attracting more numerous international students to the university. 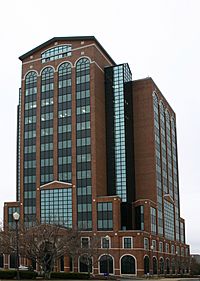 City Center. Built by Joseph Swanson, a major developer in the area. 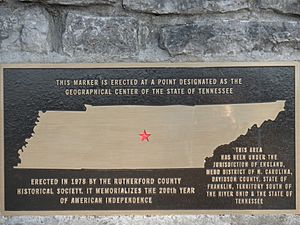 Plaque on a stone monument erected in 1978 designating the geographic center of Tennessee.

Murfreesboro is the geographic center of the state of Tennessee. A stone monument marks the official site on Old Lascassas Pike, about 0.5 miles (0.80 km) north of MTSU.

The West Fork of the Stones River flows through Murfreesboro. A walking trail, the Greenway, parallels the river for several miles. A smaller waterway, Lytle Creek, flows through downtown including historic "Cannonsburgh Village". Parts of the 19-mile (31 km) long creek suffer from pollution due to the urban environment and its use as a storm-water runoff.

Murfreesboro is home to a number of natural and man-made lakes plus several small wetlands including Todd's Lake and the Murfree Spring wetland area.

Murfreesboro has been in the path of destructive tornados several times. On April 10, 2009, an EF4 tornado struck the fringes of Murfreesboro. As a result, two people were killed and 41 others injured. 117 homes were totally destroyed, and 292 had major damage. The tornado is estimated to have caused over $40 million in damage.

Murfreesboro is served by Nashville International Airport (IATA code BNA), Smyrna Airport (MQY) and Murfreesboro Municipal Airport (MBT). The city also benefits from several highways running through the city, including Interstates 24 and 840; U.S. Routes 41, 70S, and 231; and State Routes 1, 2, 10, 96, 99, and 268. Industry also has access to North-South rail service with the rail line from Nashville to Chattanooga.

Since April 2007, the City of Murfreesboro has established a new transportation system with nine small buses, each capable of holding sixteen people and including two spaces for wheelchairs. The system is called "Rover"; the buses are bright green with "Rover" and a cartoon dog painted on the side. Buses operate in six major corridors: Memorial Boulevard, NW Broad Street, Old Fort Parkway, South Church Street, Mercury Boulevard and Highland Avenue.

Cannonsburgh Village is a reproduction of what a working pioneer village would have looked like from the period of the 1830s to the 1930s. Visitors can view the grist mill, school house, doctor's office, Leeman House, Caboose, Wedding Chapel, and other points of interest. It is also home to the World's Largest Cedar Bucket.

Murfreesboro Greenway System is a system of greenways with 12 miles (19 km) of paved paths and 11 trail heads. In 2013, the city council approved a controversial 25-year "master plan" to extend the system by adding 173 miles worth of new greenways, bikeways and blueways at an estimated cost of $104.8 million.

Murfreesboro hosts several music-oriented events annually, such as the Main Street Jazzfest presented by MTSU's School of Music and the Main Street Association each May. For over 30 years, Uncle Dave Macon Days has celebrated the musical tradition of Uncle Dave Macon. This annual July event includes national competitions for old-time music and dancing.

Because of MTSU's large music program, the city has fostered a number of bands and songwriters, including: The Tony Danza Tapdance Extravaganza, A Plea for Purging, Self, Fluid Ounces, The Katies, Count Bass D, Destroy Destroy Destroy and The Features.

The Murfreesboro Center for the Arts, close to the Square, entertains with a variety of exhibits, theatre arts, concerts, dances, and magic shows. Murfreesboro Little Theatre has provided the community with popular and alternative forms of theatre arts since 1962.

Murfreesboro's International FolkFest began in 1982 and is held annually during the second week in June. Groups from countries spanning the globe participate in the festival, performing traditional songs and dances while attired in regional apparel.

Other organizations include Youth Empowerment through Arts and Humanities and the Murfreesboro Youth Orchestra.

The Discovery Center at Murfree Spring is a nature center and interactive museum focusing on children and families. The facility includes 20 acres (8 ha) of wetlands with a variety of animals.

Bradley Academy Museum contains collectibles and exhibits of the first school in Rutherford County. This school was later renovated to become the only African American school in Murfreesboro, which closed in 1955.

The Stones River National Battlefield is a national park which memorializes the Battle of Stones River, which took place during the American Civil War during December 31, 1862, to January 3, 1863. The grounds include a museum, a national cemetery, monuments, and the remains of a large earthen fortification called Fortress Rosecrans.

Oaklands Historic House Museum is a 19th-century mansion which became involved in the Civil War. It was occupied as a residence until the 1950s, after which it was purchased by the City of Murfreesboro and renovated into a museum by the Oaklands Association.

Murfreesboro is the home of a Consolidated Mail Outpatient Pharmacy (CMOP). It is part of an initiative by the Department of Veterans Affairs to provide mail order prescriptions to veterans using computerization at strategic locations throughout the United States. It is located on the campus of the Alvin C. York Veterans Hospital.

The City Center building (also known as the Swanson Building) is the tallest building in Murfreesboro. Located in the downtown area it was built by Joseph Swanson in 1989. It has 15 floors, including a large penthouse, and stands 211 feet (64 m) tall. As a commercial building its tenants include Bank of America and is the headquarters for the National Healthcare Corporation (NHC).

All content from Kiddle encyclopedia articles (including the article images and facts) can be freely used under Attribution-ShareAlike license, unless stated otherwise. Cite this article:
Murfreesboro, Tennessee Facts for Kids. Kiddle Encyclopedia.