Kids Encyclopedia Facts
Not to be confused with Rutherford, Tennessee.

Rutherford County is included in the Nashville-Davidson–Murfreesboro–Franklin, TN Metropolitan Statistical Area. Since the turn of the 21st century, it has been the destination of numerous immigrants, who have settled in the area, including many from Somalia and Kurds from Iraq. The proportion of ethnic minorities has risen slowly within the county.

Rutherford County was formed in 1803 from parts of Davidson, Williamson and Wilson counties, and named in honor of Griffith Rutherford (1721–1805). Rutherford was a North Carolina colonial legislator and an American Revolutionary War general, who settled in Middle Tennessee after the Revolution. He was appointed President of the Council of the Southwest Territory (the upper chamber of the territorial legislature) in 1794.

Rutherford County strongly supported the Confederacy during the Civil War, having voted 2,392 to 73 in favor of Tennessee's Ordinance of Secession on June 8, 1861. Rutherford County's central location and proximity to Nashville during the Civil War made it a contested area. The county was home to one of the bloodiest battles of the war, the Battle of Stones River, which was fought between December 31, 1861, and January 2, 1862. On July 13, 1862, Confederate General Nathan Bedford Forrest conducted a series of operations in the county known as Forrest's Raid. The raid successfully led to the surrender of Union forces occupying the area. Soon after, Union troops retook the region and occupied it until the end of the war.

Rutherford County is an outlying part of metropolitan Nashville. Since 1970, its population has been increasing rapidly as Nashville becomes a true metropolis. The rate of growth accelerated in the 1990s and continued at a brisk pace into the first decade of the 21st century. 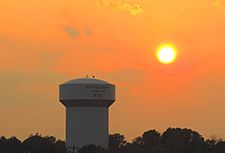 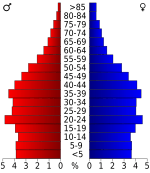 All content from Kiddle encyclopedia articles (including the article images and facts) can be freely used under Attribution-ShareAlike license, unless stated otherwise. Cite this article:
Rutherford County, Tennessee Facts for Kids. Kiddle Encyclopedia.