Marshall County is a county located in the U.S. state of Tennessee. As of the 2010 census, the population was 30,617. Its county seat is Lewisburg.

Marshall County is the home of the Tennessee Walking Horse Breeders' and Exhibitors' Association. Another native of Marshall County is the fainting goat. To celebrate this unique breed, the county holds an annual festival known as "Goats, Music and More," drawing visitors from around the world.

Marshall County was created in 1836 from parts of Giles, Bedford, Lincoln and Maury counties, and was named after the American jurist, John Marshall, Chief Justice of the U.S. Supreme Court. 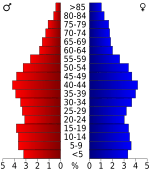 All content from Kiddle encyclopedia articles (including the article images and facts) can be freely used under Attribution-ShareAlike license, unless stated otherwise. Cite this article:
Marshall County, Tennessee Facts for Kids. Kiddle Encyclopedia.