Lincoln County is a county located in the U.S. state of Tennessee. As of the 2010 census, the population was 33,361. Its county seat and largest city is Fayetteville. The county is named for Major General Benjamin Lincoln, an officer in the American Revolutionary War.

Lincoln County was created in 1809 from parts of Bedford County. The land occupied by the county was part of a land session obtained from the Cherokee and Chickasaw in 1806.

The Lincoln County Process, used in the distillation of Tennessee whiskey, is named for this county, as Jack Daniel's distillery was originally located there. However, a subsequent redrawing of county lines resulted in the establishment of adjacent Moore County, where it is now located, so no current Lincoln County business uses its namesake process. 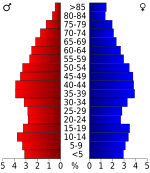 There were 15,241 households out of which 28% had children under the age of 18 living with them, 58% were married couples living together, 11% had a female head of household with no husband present, and 27% were non-families. 25% of all households were made up of individuals and 12% had someone living alone who was 65 years of age or older. The average household size was 2.45 and the average family size was 2.93.

All content from Kiddle encyclopedia articles (including the article images and facts) can be freely used under Attribution-ShareAlike license, unless stated otherwise. Cite this article:
Lincoln County, Tennessee Facts for Kids. Kiddle Encyclopedia.