Madison County is a county of the U.S. state of Alabama. As of the 2010 Census, the population was 334,811, making it the third-most populous county in Alabama. Its county seat is Huntsville. The county is named in honor of James Madison, fourth President of the United States of America and the first President to visit the state of Alabama. Madison County covers parts of the former Decatur County.

Madison County was established on December 13, 1808 by the governor of the Mississippi Territory. It is recognized as the "birthplace" of Alabama, which was founded there on December 14, 1819. For much of the county's history, the economy revolved mainly around agriculture. Madison County was one of the largest cotton-producing counties in the state, and textile mills operated around the county.

This changed when a group of former Nazi German rocket scientists, led by Wernher von Braun, came to Redstone Arsenal in 1950. They developed, among others, the Redstone rocket, which was modified to launch the first two Americans into space. Tens of thousands of jobs came to the area as a result of the Space Race, and the population of Madison County rose from 72,903 in 1950 to an estimated 2015 population of 353,089. 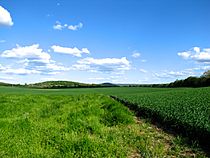 All content from Kiddle encyclopedia articles (including the article images and facts) can be freely used under Attribution-ShareAlike license, unless stated otherwise. Cite this article:
Madison County, Alabama Facts for Kids. Kiddle Encyclopedia.