Madison is a city located primarily in Madison County, near the northern border of the State of Alabama. Madison extends west into neighboring Limestone County. The city is included in the Huntsville Metropolitan Area, the second-largest in the state, and is also included in the merged Huntsville-Decatur Combined Statistical Area. As of the 2010 census, the population of the city was 42,938. Madison is bordered by Huntsville on all sides. 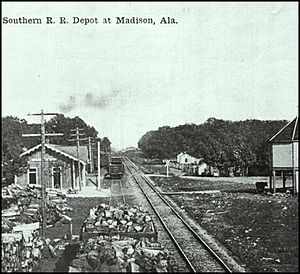 This area was occupied historically by the Koasati (also known as Coushatta), a Muskogean-speaking people and, before them, thousands of years of indigenous cultures.

Madison's first European-American resident was John Cartwright, who settled in the area in 1818. The city was originally known as Madison Station, and it developed in the 1850s around a stop of the Memphis & Charleston Railroad. Textile mills were built in the area in the late 19th century for processing of cotton.

Madison was the site of a battle in the American Civil War on May 17, 1864, when Col. Josiah Patterson's 5th Alabama Cavalry, supported by Col. James H. Stuart's cavalry battalion and a section of horse artillery, drove Col. Adam G. Gorgas's 13th Illinois Infantry Regiment from the city. Patterson's men captured the 13th Illinois Regiment's wagon train, taking 66 prisoners. They also burned Union supplies and tore up the railroad tracks before retreating. Portions of the 5th Ohio Cavalry, the 59th Indiana Infantry, and the 5th Iowa Infantry were sent in pursuit from Huntsville. They skirmished with Patterson's rear guard that evening at Fletcher's Ferry on the Tennessee River south of Madison.

In the World War II and postwar period, military and NASA operations were moved to Huntsville, stimulating an increase in population in the region. Suburbanization drew residents to outlying areas, where new homes were built. By 1980, Madison's population was 4,057. In the late 20th century, Madison's population increased rapidly as it developed as a suburb of Huntsville. By 2010 its population had grown to 42,938; the US Census estimated the city had 46,450 in 2014.

According to the Madison Chamber of Commerce, Madison was the fastest-growing city in Alabama as of 2010.

All content from Kiddle encyclopedia articles (including the article images and facts) can be freely used under Attribution-ShareAlike license, unless stated otherwise. Cite this article:
Madison, Alabama Facts for Kids. Kiddle Encyclopedia.