The airport is part of the Port of Huntsville (along with the International Intermodal Center and Jetplex Industrial Park), and serves the Huntsville-Decatur Combined Statistical Area. Opened in October 1967 as the Huntsville Jetport, this was the third airport for Huntsville. Today it has 12 gates with restrooms, shops, restaurants, phones and murals depicting aviation and space exploration scenes. There is a Four Points by Sheraton above the ticketing area/lobby, and adjacent to the terminal is a parking garage and to opposite sides are the control tower and a golf course.

The airport's west runway, at 12,600 ft (3,800 m), is the second longest commercial runway in the southeastern United States, being 400 ft (120 m) shorter than the longest runway at Miami International Airport. Huntsville is frequently used as a diversion airport from larger hubs in the Southeast, such as Atlanta, due to its long runways and sophisticated snow removal and de-icing equipment.

The airport's "Fly Huntsville" jingle encourages passengers to depart from Huntsville instead of driving to Birmingham or Nashville. An August 2009 report by the Bureau of Transportation Statistics for the first quarter of 2009 revealed that Huntsville passengers paid, on average, the highest airfares in the United States. The airport reported that commercial airline passenger traffic at Huntsville International increased 2.3% in January 2010 over the previous year.

The original airport, Huntsville Flying Field / Mayfair Airport, was south of the city. It had sod runways, no lighting and opened in the early 1930s. By 1934 the airport had four dirt/sod runways, southwest of today's intersection of Whitesburg Drive and Bob Wallace Avenue.

A second airport south of downtown opened in 1941 with two paved runways, Runway 18/36 being 4,000' long. The terminal building was a wooden shack at the northeast end of Runway 5/23; the National Weather Service opened at the municipal airport in 1958. The second airport was near today's intersection of Memorial Parkway and Airport Road; traces of runways and terminal facilities can be seen from the air.

HSV's first scheduled jets were United 727s in late 1966. The current airport opened in 1967, west of the city along I-565. A ribbon cutting ceremony was held 15 September 1968 with Dr. Wernher von Braun and Senator John Sparkman in attendance.

On July 10, 2018, the airport announced that Frontier Airlines would begin nonstop service to Denver and Orlando in October with the A320 Family. This marked the resumption of low-cost airline presence at Huntsville as AirTran Airways had previously operated at the airport with 717s, but pulled out in 2012 due to low passenger numbers.

Huntsville International Airport is served by six passenger airlines representing the three international airline alliances. Some service is flown by the regional affiliates via code sharing agreements. Sixcargo airlines serve the airport; two (Cargolux from Luxembourg and Panalpina from Switzerland) are foreign. Cargolux and Panalpina fly only Boeing 747s. Formerly, the airport was also served by Latam Cargo Colombia.

In 1969-80 Huntsville had nonstop or direct flights to Los Angeles and to Florida and Texas during the U.S. space program. These flights served the NASA Marshall Space Flight Center in Huntsville.

In June 1967 Eastern Airlines introduced "The Space Corridor" linking Huntsville with St. Louis and Seattle and with the NASA Kennedy Space Center in Florida. In the June 13, 1967 timetable, Eastern Boeing 727-100s flew to St. Louis and on to Seattle, and nonstop to Orlando continuing to Melbourne, Florida, near the Kennedy Space Center. Eastern flew direct Douglas DC-9-30s to Houston, home of the NASA Johnson Space Center, via New Orleans in the late 1960s. Eastern had direct jets to Chicago during the early 1970s via Nashville. In April 1975 Eastern served Nashville, Orlando and St. Louis nonstop from Huntsville on 727s and DC-9s.

In November 1967 Eastern scheduled nine departures each weekday from the new airport while United had four and Southern had 17. 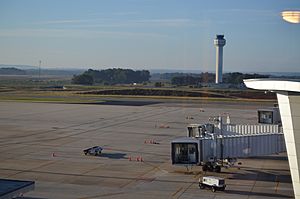 View of the new control tower

By 1989 the airport was linked to major airline hubs: Delta served Atlanta and Dallas/Fort Worth, Eastern served Atlanta, American served Dallas/Fort Worth and Nashville, Northwest served Memphis, and United served Chicago and Washington Dulles. United and American flew nonstop to Birmingham, United continued to fly nonstop to Knoxville, and Delta had a daily flight to Memphis. United pulled out entirely by 1995, while USAir entered the market in the early 1990s with daily flights to Charlotte.

Only Frontier Airlines and Delta Air Lines operate main line jets to the airport now. Frontier has Airbus A320 service nonstop to Denver and Orlando. Delta operates Boeing 717 and McDonnell Douglas MD-88 aircraft to Atlanta. The airline previously flew Douglas DC-9-50s nonstop to Atlanta with some flights being flown by ExpressJet Canadair CRJ-700 and CRJ-200s as Delta Connection service to ATL, however all services to ATL have been switched to mainline jets. The airport had service to New Orleans on Glo Airlines but that ended after the airline bankruptcy in 2017. 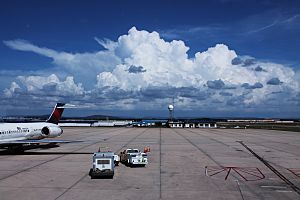 View of the ramp

In 1989, Huntsville International became the first airport in the United States to install an ASR-9 dual-channel airport surveillance radar system. as well as one of five airports to use glass walled jet bridges in the U.S.

Currently, Huntsville International is undergoing major renovations of the concourse facilities, which will add:

Also, plans are underway for another terminal area, added runways, and the lengthening of the two current runways.

All content from Kiddle encyclopedia articles (including the article images and facts) can be freely used under Attribution-ShareAlike license, unless stated otherwise. Cite this article:
Huntsville International Airport Facts for Kids. Kiddle Encyclopedia.