Huntsville is a city in and the county seat of Walker County, Texas, United States. The population is 38,548 as of the 2010 census. It is the center of the Huntsville micropolitan area. 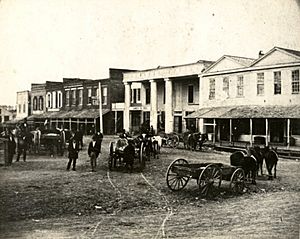 Downtown Huntsville in the 1870s. 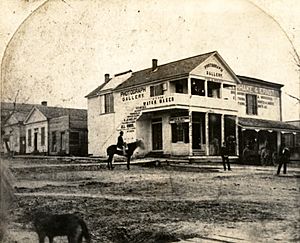 Downtown Huntsville in the 1870s.

The city had its beginning about 1836, when Pleasant and Ephraim Gray opened a trading post on the site. Ephraim Gray became first postmaster in 1837, naming it after his former home town, Huntsville in Madison County, Alabama.

Huntsville became the home of Sam Houston, who served as President of the Republic of Texas, Governor of the State of Texas, Governor of Tennessee, U.S. Senator, and Tennessee congressman. General Houston led the Texas Army in the Battle of San Jacinto – the decisive victory of the Texas Revolution. Houston has been noted for his life among the Cherokees of Tennessee, and – near the end of his life – for his opposition to the American Civil War, a position which was a very unpopular in his day. Located in Huntsville are two of Houston's homes, his grave, and the Sam Houston Memorial Museum. Houston's life in Huntsville is also commemorated by his namesake Sam Houston State University, and by a 70 ft (21 m) statue. (The towering statue, "A Tribute to Courage" by artist David Adickes, has been described as the world's largest statue of an American hero, and is easily viewed by travelers on Interstate 45.)

Huntsville was also the home of Samuel Walker Houston (1864–1945), a prominent African-American pioneer in the field of education. He was born into slavery on February 12, 1864 to Joshua Houston, a slave owned by Sam Houston. Samuel W. Houston founded the Galilee Community School in 1907, which later became known as the Houstonian Normal and Industrial Institute, in Walker County, Texas.

In 1995, on the grounds of the old Samuel W. Houston Elementary School, the Huntsville Independent School District, along with the Huntsville Arts Commission and the high school's Ex-Students Association, commissioned the creation of The Dreamers, a monument to underscore the contributions made by the black community in the growth and development of Huntsville and Walker County.

There were 10,266 households out of which 25.3% had children under the age of 18 living with them, 37.0% were married couples living together, 12.5% had a female householder with no husband present, and 46.7% were non-families. 30.8% of all households were made up of individuals and 7.5% had someone living alone who was 65 years of age or older. The average household size was 2.31 and the average family size was 2.97.

According to the United States Census Bureau, the city has a land area of 35.86 square miles in 2010.

Huntsville is about 70 miles (110 km) north of Houston. It is part of the Texas Triangle megaregion.

The climate in this area is characterized by hot, humid summers and generally mild to cool winters. According to the Köppen Climate Classification system, Huntsville has a humid subtropical climate, abbreviated "Cfa" on climate maps.

Greyhound Lines operates the Huntsville Station in Huntsville. As of 2001 many former prisoners released from the Texas Department of Criminal Justice system use the station to travel to their final destinations. The station is three blocks uphill from the Huntsville Unit, a point of release for prisoners exiting the TDCJ. 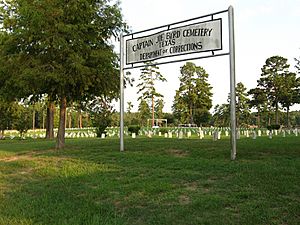 Captain Joe Byrd Cemetery, the Texas Department of Criminal Justice cemetery for deceased prisoners who are not reclaimed by their families

In September 2009, the Huntsville Cultural District was designated by the Texas Commission on the Arts as one of the first seven state cultural districts.

The Huntsville Cultural District encompasses a variety of facilities and attractions including: Museums and Art Galleries Artist Studios and Workshops Historic Homes and Sites Theaters and Performances Cultural Events and Festivals

The Cultural District is home to some of the finest historical architecture in Texas. Enhancing the downtown buildings are murals by world-renowned artist Richard Haas. You can also tour artistically unique homes built from recycled materials that were created by Dan Phillips of Phoenix Commotion. You can enjoy self-guided walking and driving tours, art activities, music-theater-dance performances, shopping, antiquing, and unique eateries.

Ruth Massingill and Ardyth Broadrick Sohn, authors of Prison City: Life with the Death Penalty in Huntsville, Texas, said that Huntsville shares several traits with other small towns. For instance many insiders include members of Huntsville's founding families who still reside in Huntsville. They also said "Disagreement is a well-established Huntsville Tradition." The authors say that debate is a significant part of the leadership agenda, and that the residents of Huntsville disagree about capital punishment.

All content from Kiddle encyclopedia articles (including the article images and facts) can be freely used under Attribution-ShareAlike license, unless stated otherwise. Cite this article:
Huntsville, Texas Facts for Kids. Kiddle Encyclopedia.