Sam Houston State University (colloquially known as SHSU or Sam) is a public university in Huntsville, Texas. It was founded in 1879 and is the third-oldest public college or university in Texas. It is one of the oldest purpose-built institutions for the instruction of teachers west of the Mississippi River and the first such institution in Texas. It is named for Sam Houston, who made his home in the city and is buried there.

SHSU is a member of the Texas State University System and has an enrollment of more than 20,000 students across over 80 undergraduate, 59 master's, and 10 doctoral degree programs. Its programs are ranked 230-301 by U.S. News & World Report. The university also offers more than 20 online bachelor's and graduate degrees. It was the first institution classified as a Doctoral Research University by the Carnegie Commission on Higher Education within the Texas State University System.

The Sam Houston State University campus was originally home to Austin College, the Presbyterian institution that relocated to Sherman, Texas, in 1876. Austin Hall was constructed in 1851 and is the oldest university building west of the Mississippi still in operation. It was renovated in 2012 and is used today for special meetings and events. Notably, Sam Houston himself attended and participated in the original dedication of the building.

Created by legislation signed by Governor Oran M. Roberts on San Jacinto Day, April 21, 1879, Sam Houston Normal Institute's dedicated goal was to train teachers for the public schools of Texas. It was the first teacher-training school in the southwestern United States. On October 10 of the same year, the first class of 110 students and four faculty commenced instruction. The first President of the school, Bernard Mallon, died eleven days after the institute opened.

The one-room Peabody Memorial Library was the first free-standing campus library in Texas; it was constructed in 1901 with funds provided by the George Peabody Foundation. According to the Normal Institute's catalogue, the library was "a very handsome structure, and especially designed for the purpose for which it is to be used. It is said that no school of this kind in the South has a Building equal to it." Fully restored, it is now used as a venue for special university events.

When the university first opened, students received a certification to teach in the state's elementary and secondary schools. After 1919, the university began to award bachelor's degrees. In 1936, the school awarded its first postbaccalaureate degree. 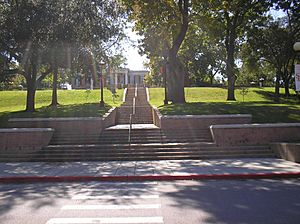 Steps to the Old Main, with a view of Austin Hall.

The university launched its first capital campaign in March 2016 with a $50 million goal and closed the campaign's books on August 31, 2010, with $61.2 million in commitments. The university has 110,000 living, addressable alumni and an active Alumni Association with 10,000 members, holding 200 meetings and events annually.

Throughout the course of its history, Sam has undergone a number of name changes:

In April 2007, Texas House Bill 1418 passed without objection in the Texas Legislature, preventing The Texas State University System's Board of Regents from changing the university's name to Texas State-Sam Houston.

The oak-studded rural main campus sits on 316 acres (128 hectares) in the central area of Huntsville. Two large agricultural complexes feature a 1,600-acre (650 ha) teaching and research farm and a rodeo arena. The campus also features a planetarium, an observatory, a body farm, and an 18-hole golf course named Raven Nest. The mall area of the main campus includes Blatchley Bell Tower and Clock and a fountain.

The campus stood in for the fictional Austin University in the motion picture The Life of David Gale.

Programs within the College of Criminal Justice were recently ranked by the Journal of Criminal Justice in the top five nationally. The theater and dance programs were ranked by Dance Spectrum Magazine in the top 25 nationally, and according to the National Dance Association, SHSU is home to quality athletic dance team. The university offers the only Professional Golf Management program in Texas, one of 20 in the country. SHSU also has one of the oldest speech and debate programs in the nation.

The university has been commended as of late for offering courses that encourage the study of the lore, the lure, and the history of the Lone Star State. In 2012, digital archivists at the university library worked with officials at a local veterans museum to launch the Texas Military Veterans Oral History collection.

SHSU's athletic teams have been nicknamed "The Bearkats" since 1923 when the University's name was changed by the Texas State Legislature from Sam Houston Normal Institute to Sam Houston State Teachers College. Prior to 1923, the varsity sports teams were nicknamed "The Normals".

It is doubtful those who coined the "Bearkat" nickname had a particular animal in mind. More likely, the name came from a popular local saying of the time, "tough as a Bearkat!" The late Reed Lindsey, who was a student/athlete in the 1920s and later retired as University registrar, once said that "it was a good fighting name of the time." Since the animal in the saying was thought more mythical than real, the spelling settled upon was "Bearkat." However, there are some arguments that the Sam Houston Bearkat is modeled after either a Binturong or a Kinkajou.

In the late 1940s, then SHSU president Harmon Lowman attempted to change the SHSU mascot from Bearkats to "Ravens" (after General Sam Houston's Cherokee nickname). Mrs. Vernon Schuder reported that the alumni were polled and she voted for the raven but that "all those old Bearkats beat us out!"

A Sammy Bearkat mascot character, with the later addition of a Samantha, began appearing at SHSU sports events in 1959. Samantha has since been retired.

SHSU's primary rival is Stephen F. Austin State University (SFA) and tensions between the two schools can run high before major sporting events that pit one against the other. The annual football game between SHSU and SFA, named the Battle of the Piney Woods, dates back to 1923. Since 2010, the series has been played at NRG Stadium in Houston, Texas. The rivalry is the second-oldest Division I Football Championship Subdivision rivalry in Texas.

Sam Houston's Bearkat is represented by Sammy Bearkat, a costumed mascot, who has entertained and led crowds in cheers during sporting events since 1959.

Club sports are very popular at SHSU. Some available to students include: Powerlifting, Ultimate Frisbee, lacrosse, rugby, martial arts, trap and skeet, inline hockey, basketball, volleyball, soccer, tennis, and baseball. The Sam Houston Quidditch team won in 2013 the IQA World Cup VI Division 2 championship. The Spirit Programs, cheer, dance, and mascots, of Sam Houston hold the most National titles out of all of the sports and recreational activities at Sam Houston. The coed team is the reigning champions from NCA this past April. The All Girl team made school history by winning their first National Championship in April 2014.

All content from Kiddle encyclopedia articles (including the article images and facts) can be freely used under Attribution-ShareAlike license, unless stated otherwise. Cite this article:
Sam Houston State University Facts for Kids. Kiddle Encyclopedia.