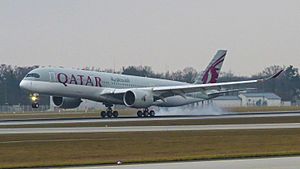 Currently, Qatar Airways is the airline that uses the most Airbus A350 XWB.

Qatar Airways (in Arabic: القطرية, al-Qatari'ya) is an airline company. This airline is based in Doha, the capital city of Qatar. Its office can be found at Hamad International Airport. There will be another airport in Doha in short time. It is one of the fastest growing airlines, and one of the four airlines that are rated "five stars" because of its good service.

All content from Kiddle encyclopedia articles (including the article images and facts) can be freely used under Attribution-ShareAlike license, unless stated otherwise. Cite this article:
Qatar Airways Facts for Kids. Kiddle Encyclopedia.