The Boeing 727 is a jet airliner. It is made by Boeing Commercial Airplanes. It can carry 149 to 189 passengers. It can fly for 2,400 to 2,700 nautical miles (4,400 to 5,000 km). The Boeing 727 was made to fly short distances. It can also take off from short runways at smaller airports. It has three Pratt & Whitney JT8D engines. One engine is at the back, and the other two are on the sides of the plane. The 727 is the only plane made by Boeing which has three engines. 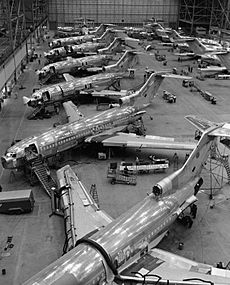 In 1960, Pratt & Whitney wanted to sell its new JT8D turbofan engine design. United and Eastern were interested in this engine, so Pratt & Whitney decided to keep designing it. Eddie Rickenbacker, from Eastern, told Boeing that the airline wanted JT8D engines for its 727s. At first, Boeing did not want to use the JT8D for the 727, but it eventually decided to use the JT8D.

The 727 has special parts on its wings which help it to make more lift. This means that it can take off from shorter runways than most other jets.

Later, some longer 727s were made to carry more passengers. They replaced other jet airliners like the Boeing 707 and Douglas DC-8. They also replaced propeller planes like the DC-4, DC-6, DC-7 and the Lockheed Constellation. 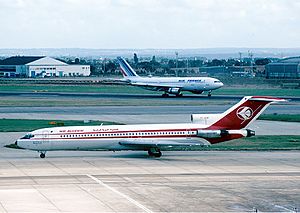 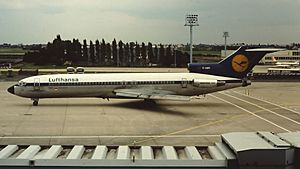 The 727 was meant for small airports. This meant that it would have to do without some things like stairs. Boeing built airstairs into the 727. At first, the airstairs could be opened while the plane was flying. However, D. B. Cooper, who was a hijacker, jumped out of a 727. This happened while it was flying over the Pacific Northwest. Boeing then changed the design so that the airstairs could not be opened while the plane was flying. The 727 also had an auxiliary power unit (APU). This meant that the 727 could run its systems without any power from the ground. The APU is near the undercarriage. This is quite unusual. 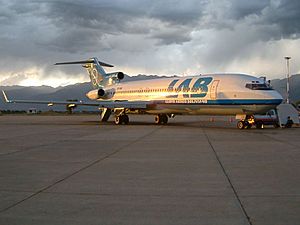 One thing which allowed the 727 to land on short runways was the design of its wings. The 727 had no engines on its wings, so flaps could be used on the full wing. There were also some other things which made more lift. Together, these things make a lift coefficient of 3.0.

The 727 is one of the noisiest airliners. The 727's JT8D engines are low-bypass. This makes them much noiser than high-bypass engines. Boeing thought about giving the 727 quieter engines. They said that the JT8D-200 engine could be used. 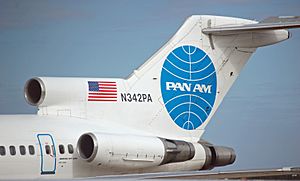 Tail section of a Pan Am Boeing 727

All 727s being used today need to be given a hush kit. A hush kit is something which makes a jet engine quieter. FedEx makes one of these kits. Over 60 companies have bought this. Winglets have also been made for the 727 by different companies.

727s (including 727s which have a hush kit) are banned from some airports in Australia because of how much noise they make.

The 727 could fly to different countries as well as to places in the same country. It is useful in airports where the runway is made of gravel. Since the engines are so high up, there is not much risk that they will be damaged by things on the ground. 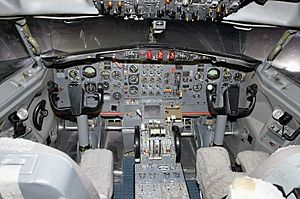 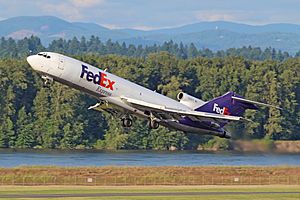 The 727 was also used by the military. Since the airstairs could be opened while the plane was flying, the Central Intelligence Agency used them to put agents and supplies into Vietnam.

A FedEx 727 at Portland International Jetport with cargo doors open 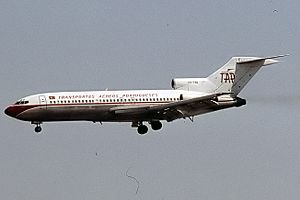 This type could be changed into a cargo plane and into a passenger plane.

QC stands for Quick Change. This is a 727-100C which can be changed into a cargo plane much quicker (in 30 minutes).

QF stands for Quiet Freighter. It was made for the United Parcel Service. 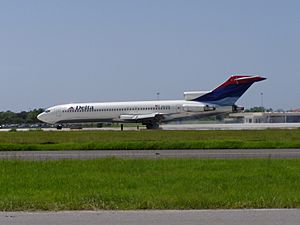 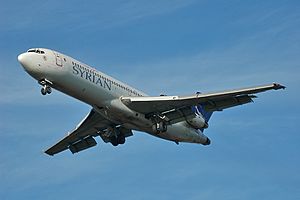 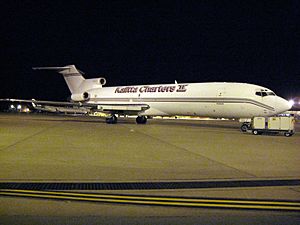 This type can fly for longer. It also has some improvements in the cabin.

This type has 50 mph (80 km/h) more speed. This happened because the engines were replaced with more powerful ones. It also had winglets. This type was first made by Valsan Partners, but Quiet Wing Technologies in Redmond, Washington, began to make it later.

The 727 has been used by some governments. The Belgian, Yugoslavian, Mexican, New Zealand, and Panama air forces have used it. The United States military also used the 727; it was called the C-22.

Democratic Republic of the Congo

All content from Kiddle encyclopedia articles (including the article images and facts) can be freely used under Attribution-ShareAlike license, unless stated otherwise. Cite this article:
Boeing 727 Facts for Kids. Kiddle Encyclopedia.