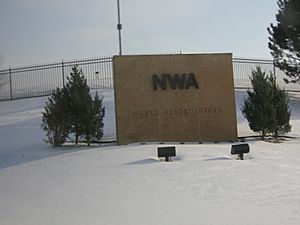 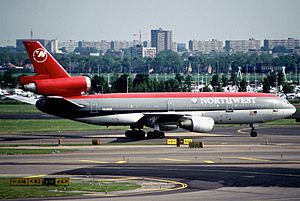 As of 2006 Northwest was the world's sixth largest airline in terms of domestic and international scheduled passenger miles flown and the U.S.'s sixth largest airline in terms of domestic passenger miles flown. In addition to operating one of the largest domestic route networks in the U.S., Northwest carries more passengers across the Pacific Ocean (5.1 million in 2004) than any other U.S. carrier, and carries more domestic air cargo than any other American passenger airline. It is the only U.S. combination carrier (passenger and cargo service) operating dedicated Boeing 747 freighters. The airline, along with its parent company, Northwest Airlines Corporation and subsidiaries, operated under Chapter 11 bankruptcy protection which, in the United States, allows continued operation during the reorganization effort, not stopping flights as in the case in some countries. Northwest emerged from bankruptcy protection on May 31, 2007.

On April 14, 2008, Northwest announced it would be merging with Delta Air Lines, subject to regulatory review. The merger was officially completed on January 31, 2010.

All content from Kiddle encyclopedia articles (including the article images and facts) can be freely used under Attribution-ShareAlike license, unless stated otherwise. Cite this article:
Northwest Airlines Facts for Kids. Kiddle Encyclopedia.