KLM Royal Dutch Airlines is an airline that is a part of Air France-KLM. It is based in Amsterdam, Netherlands. It has flights that stay in Netherlands and other flights that go world-wide. KLM goes to 90 different places and its main airport or hub is Amsterdam Schiphol Airport. Before KLM combined with Air France, KLM was the main airline of the Netherlands. KLM is the world's oldest airline with its original name.

KLM and its partners serve 133 destinations in 70 countries on five continents from their hub at Amsterdam Schiphol Airport. In September 2014, KLM had around 32,000 people working for it. 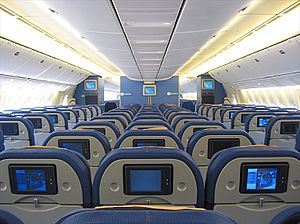 KLM has three cabin classes for international long-haul routes; World Business Class, Economy Comfort and Economy. Personal screens with audio-video on demand, satellite telephone, SMS, and e-mail services are available in all cabins on all long-haul aircraft . European short-haul and medium-haul flights have Economy seats in the rear cabin, and Economy Comfort and Europe Business in the forward cabin.

KLM's in-flight entertainment system is available in all classes on all wide-body aircraft; it provides all passengers with Audio/Video on Demand (AVOD). The system includes interactive entertainment including movies, television programs, music, games, and language courses. The in-flight entertainment system can be used to send SMS text messages and emails to the ground. Panasonic's 3000i system is installed on all Boeing 747-400, Boeing 777-200ER, and on most of the Airbus A330-200 aircraft. 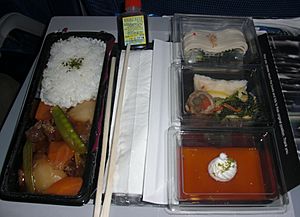 KLM airline food on a flight to Japan

Economy Class passengers on long-haul flights are served a hot meal and a snack, and second hot meal or breakfast, depending on the duration of the flight. On short-haul flights, passengers are served sandwiches or a choice of sweet or savory snack, depending on the duration and time of the day. Most alcoholic beverages are free of-charge for all passengers. After a successful trial period, KLM introduced à la carte meals in Economy Class on 14 September 2011; Dutch, Japanese, Italian, cold delicacies, and Indonesian meals are offered.

Special meals, include children's, vegetarian, medical, and religious meals, can be requested in each class up to 24 or 36 hours before departure. On flights to India, China, South Korea, and Japan, KLM offers authentic Asian meals in all classes. Meals served on KLM flights departing from Amsterdam are provided by KLM Catering Services. 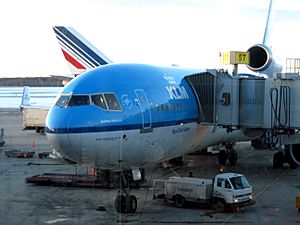 KLM 672 at gate 57 at Trudeau Airport in Montreal

KLM offers various check-in methods to its passengers, who can check in for their flights at self-service check-in kiosks at the airport, via the Internet, or via a mobile telephone or tablet. At destinations where these facilities are not available, check-in is by an airline representative at the counter. Electronic boarding passes can be received on a mobile device while boarding passes can be printed at airport kiosks.

Since 4 July 2008 KLM, in cooperation with Amsterdam Airport Schiphol, has been offering self-service baggage drop-off to its passengers. KLM passengers can now drop off their bags themselves. Before they are allowed to do that they are checked by a KLM employee.

Since the 1950s, KLM presents its World Business Class passengers with a Delft blue, miniature, traditional, Dutch house. These miniatures are reproductions of real Dutch houses and are filled with Dutch genever (Dutch gin).

Every year, a new house is presented on 7 October, the anniversary of KLM's founding in 1919. The number on the last-presented house thus represents the number of years KLM has been in operation. Special edition houses—the Dutch Royal Palace and the 17th century Cheese Weighing House De Waag in Gouda—are offered to special guests, such as VIPs and honeymoon couples.

All content from Kiddle encyclopedia articles (including the article images and facts) can be freely used under Attribution-ShareAlike license, unless stated otherwise. Cite this article:
KLM Facts for Kids. Kiddle Encyclopedia.