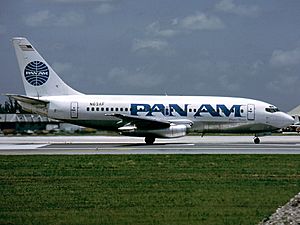 Pan American World Airways, or Pan Am, was once the largest airline of the USA. The crash of Pan Am Flight 103 and several other factors led to the airline to stop flying in 1991.

Pan Am was founded in 1926. Its first flights were from Key West, Florida to Havana, Cuba. During the 1920s and 1930s, Pan Am bought several smaller airlines in Central America and South America. These were bought to help Pan Am expand its flights throughout The Americas.Pan Am became the first airline to circumnavigate the world in 1942. By the 1950s, Pan Am had several larger airplanes like the Boeing 377, Douglas DC-6 and the Lockheed Constellation. It went to cities all across the world. In 1959, Pan Am bought its first jet - the Boeing 707. In 1970, Pan Am introduced its first widebody jet - the Boeing 747. In 1980, Pan Am was combined with National Airlines. This was because Pan Am wanted to fly domestic flights and the government didn't allow it to. When Pan Am bought National, it could finally fly domestically. In the 1980s, Pan Am started having many financial problems. Pan Am paid way too much to buy National Airlines. Pan Am also spent too much money on the new Boeing 747s. The Gulf War also caused many problems with Pan Am's transatlantic flights. Pan Am declared bankruptcy in January 1991. Delta Air Lines bought small parts of Pan Am and tried to help it. However, on December 4, 1991 Pan Am stopped flying due to the big financial problems. United Airlines got many of Pan Am's old flights. American Airlines got Pan Am's Miami hub. Pan Am was resurrected twice in 1996 and 1998.

All content from Kiddle encyclopedia articles (including the article images and facts) can be freely used under Attribution-ShareAlike license, unless stated otherwise. Cite this article:
Pan American World Airways Facts for Kids. Kiddle Encyclopedia.