The Boeing 707 was Boeing's first jet airliner. It was the most common plane in the 1960s and it was still used a lot during the 1970s. The 707 was the first jet to have a lot of passengers fly on it. The 707 was not the first jet airliner, but it was the first one to make a lot of money. It made Boeing one of the biggest makers of airliners. It also started the group of planes with "7x7" names. The Boeing 727, Boeing 737 and Boeing 757 have some parts of the 707's design.

During World War II, and after it, Boeing was known for its military planes. Boeing had made very important bombers, like the propeller B-17 Flying Fortress and B-29 Superfortress and the jet B-47 Stratojet and B-52 Stratofortress. However, Douglas and other companies were far ahead of Boeing in the airliner market. The only successful airliners Boeing made before the 707 were the Boeing 314 Clipper and Boeing 307 Stratoliner. During 1949–1950, Boeing started looking at jets. Back then, aerial refueling (when a plane can get more fuel while flying) was being used a lot. The United States Air Force had ordered 800 KC-97 Stratotankers. Since planes were beginning to use jet engines, the USAF needed a jet tanker.

Boeing looked at many wing designs and engines for the new tanker. Eventually, it chose the 367–80. The "Dash 80" took less than two years to make. It first took off on July 15, 1954. It had Pratt & Whitney JT3C engines.

Nobody knew if the 707 would make money. Back then, Boeing was making almost all of its money from military planes. The last airliner it made, the Boeing 377 Stratocruiser, lost the company $15 million before the United States Air Force bought some and called them the KC-97 Stratotanker. In a demonstration flight over Lake Washington outside of Seattle, on August 7, 1955, test pilot Tex Johnston performed a barrel roll in the 367-80 prototype. 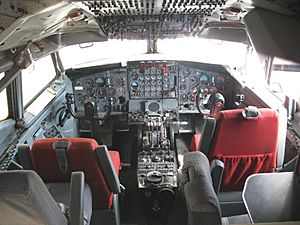 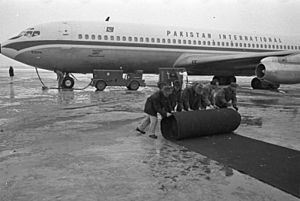 Even though the 707 should have had turbojet engines, the Pratt & Whitney JT3D was used the most. The JT3D was a turbofan engine.

On one flight, the yaw damper was switched off to give the new pilots some more experience with the plane. One pilot made a bad move, and the plane went out of control. Three of the engines were ripped off of the wing. The plane crashed near Seattle at Arlington, Washington. Four people on board died.

In his autobiography, Tex Johnston said he was flying on a 707 and he thought that there was something wrong with the yaw damper, because the plane was moving strangely. He went to the cockpit and helped fix the plane. 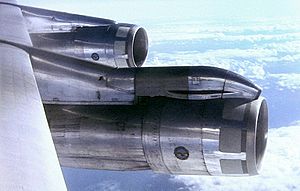 The 707 used air from the engines to pressurize the cabin. 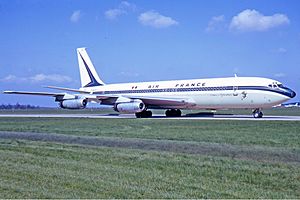 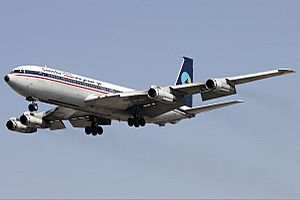 Saha Airlines Boeing 707 landing at Tehran-Mehrabad in 2011. Saha Airlines is the last airline which uses the 707.

During the Falklands War the Argentine Air Force used 707s to patrol. Some of them were caught by Royal Navy Sea Harriers.

Trans World Airlines was the last U.S. airline to fly passengers on a 707. The flight happened on October 30, 1983.

Most 707s are now private jets or cargo planes.

What the Boeing 720 was first called. American Airlines always called its 720s 707s. 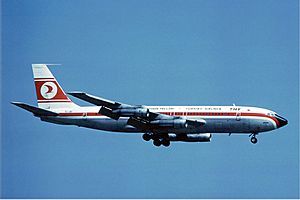 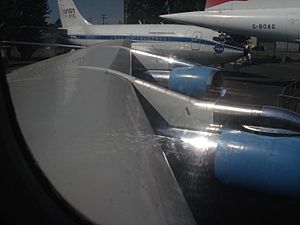 The 707-220 had more powerful Pratt & Whitney JT4A-3 turbojet engines. Five of these were made, but only four were delivered. The first one began being used in December 1959. 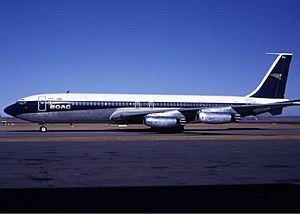 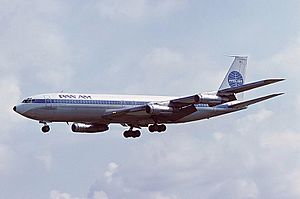 The 707-320B had a few changes made to the outside of the plane, as well as new engines. The wing was changed. This plane was first used in June 1962 by Pan Am. 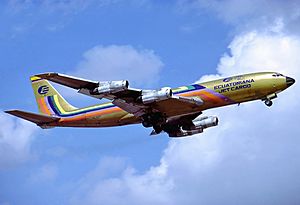 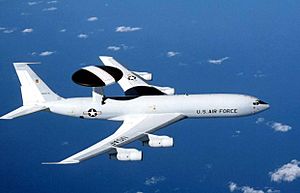 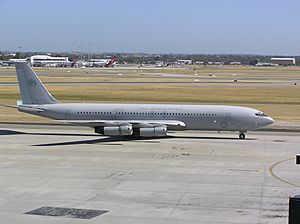 Many militaries have used the 707 for many different things.

The Boeing E-3 Sentry is a U.S. military airborne warning and control system (AWACS) aircraft. It has some of the Boeing 707's design.

All content from Kiddle encyclopedia articles (including the article images and facts) can be freely used under Attribution-ShareAlike license, unless stated otherwise. Cite this article:
Boeing 707 Facts for Kids. Kiddle Encyclopedia.