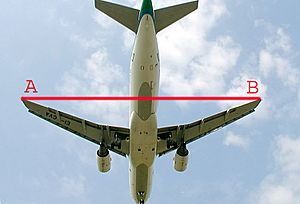 The distance A to B is the wingspan of this Aer Lingus Airbus A320.

To measure the wingspan of a bird, a live or freshly dead specimen is placed flat on its back, the wings are grasped at the wrist joints and ankles, and then the distance is measured between the tips of the longest primary feathers on each wing.

All content from Kiddle encyclopedia articles (including the article images and facts) can be freely used under Attribution-ShareAlike license, unless stated otherwise. Cite this article:
Wingspan Facts for Kids. Kiddle Encyclopedia.