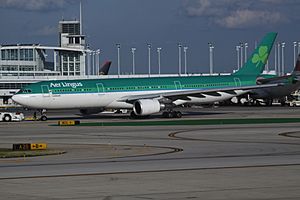 The airline began flying in April 1936. At that time, it had only one aircraft. It flew between Dublin and Bristol. As of 2015, the airline has almost 50 airplanes. It flies to about 70 airports in Europe and North America.

All content from Kiddle encyclopedia articles (including the article images and facts) can be freely used under Attribution-ShareAlike license, unless stated otherwise. Cite this article:
Aer Lingus Facts for Kids. Kiddle Encyclopedia.