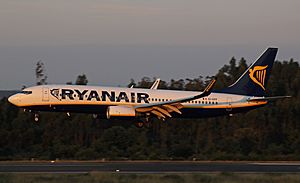 Ryanair is an Irish low-cost airline. It was started in 1985. It is based in Dublin Airport and London Stansted Airport. Ryanair goes to 165 cities. These are mostly across Europe. Ryanair has a fleet of 306 Boeing 737 aircraft.

All content from Kiddle encyclopedia articles (including the article images and facts) can be freely used under Attribution-ShareAlike license, unless stated otherwise. Cite this article:
Ryanair Facts for Kids. Kiddle Encyclopedia.