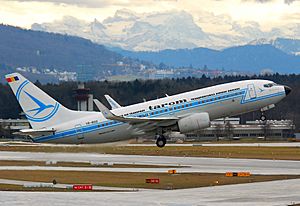 TAROM is the national airline of Romania. Its main hub is at Otopeni Airport at Bucharest. The government of Romania owns 95% of TAROM.

TAROM began in 1954. Since Romania was part of the Eastern Bloc, TAROM had to fly mostly airplanes made by the Soviet Union. When the Soviet Union ended in 1991, TAROM was allowed to buy airplanes from other countries. TAROM started flying Airbus planes in 1993. In 2010, TAROM joined SkyTeam. As of 2016, TAROM owns 23 airplanes and goes to 79 cities across Europe, Asia, Africa and North America.

All content from Kiddle encyclopedia articles (including the article images and facts) can be freely used under Attribution-ShareAlike license, unless stated otherwise. Cite this article:
TAROM Facts for Kids. Kiddle Encyclopedia.