The Boeing 737 MAX is a new family of Boeing 737. It is made by Boeing Commercial Airplanes. These airplanes replace the Boeing 737 Next Generation family. It is the fourth family of 737. The biggest change is the engines. The 737 MAX has new, better CFM International LEAP-1B engines. The outside of the plane also got changes. The very first 737 MAX was delivered in 2017, 50 years after the first Boeing 737 took off. Boeing had 1,285 orders for the 737 MAX as of May 14, 2013. Larger and smaller versions have different capacity and range.

After two fatal crashes of MAX 8 aircraft in October 2018 and March 2019, regulatory authorities around the world ordered airlines to stop using MAX 8 and MAX 9 airplanes until the reason for the crashes is found.

Boeing spent a lot of 2011 looking at two different diameters of CFM International LEAP-1B engine: 66.1 in (168 cm) or 68.1 in (173 cm). Both of these would mean that Boeing would have to make some changes to the wheels, because the engines need to be 16.9 in (42.9 cm) above the ground. Boeing said the bigger engine would use less fuel. However, because it is bigger, it would make more drag and be heavier. This would mean that even more changes would be needed.

Both engines are bigger than the 61.8 in (157 cm) CFM56-7B engines on the Boeing 737 Next Generation. The new engine will use 10–12% less fuel than the engines on the 737NG. It has been said that Boeing are looking at parts of the plane that can be changed to make less drag and burn less fuel. 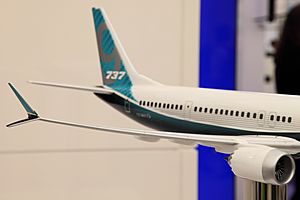 New winglets on the 737 MAX

The winglets used on the 737 MAX will be different to the winglets on the 737NG. Boeing says the new winglets will help the plane use 1.5% less fuel.

Boeing does not want to change the cockpit because they want it to be similar to the cockpit on the 737NG. Boeing also wants to add some more fly-by-wire to the 737 MAX. However, Boeing said that changes will be "very minimal".

All content from Kiddle encyclopedia articles (including the article images and facts) can be freely used under Attribution-ShareAlike license, unless stated otherwise. Cite this article:
Boeing 737 MAX Facts for Kids. Kiddle Encyclopedia.