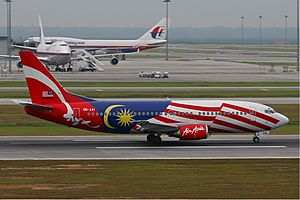 An AirAsia Boeing 737-300 in special livery denoting the Malaysian flag. 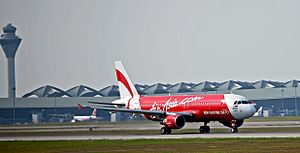 AirAsia Berhad (MYX: 5099) is a Malaysian low-cost airline based in Kuala Lumpur, Malaysia. It has been named as the world's best low-cost airline, and a pioneer of low-cost travel in Asia. AirAsia group operates domestic and international flights to 100 destinations in 22 countries. Its main hub is the klia2 (LCCT) at Kuala Lumpur International Airport (KLIA).

These are AirAsia's affiliate airlines and their hubs:

All content from Kiddle encyclopedia articles (including the article images and facts) can be freely used under Attribution-ShareAlike license, unless stated otherwise. Cite this article:
AirAsia Facts for Kids. Kiddle Encyclopedia.