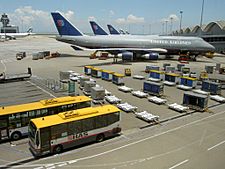 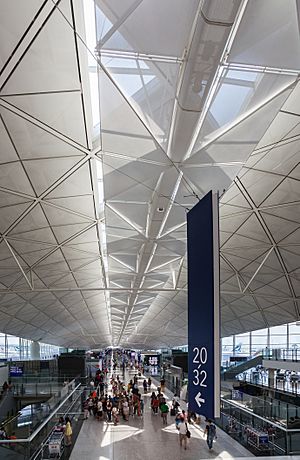 Interior of the terminal

Hong Kong International Airport (IATA airport code: HKG; ICAO airport code: VHHH), also known as Chek Lap Kok Airport is the airport of Hong Kong that was built at Chek Lap Kok on Lantau Island. It opened in 1998. It is one of the leading airports in the world, and has won "World Airport of the Year" from Skytrax for 7 times in 10 years. It is the hub for Cathay Pacific, Hong Kong Airlines, Hong Kong Express and Air Hong Kong. It is the third busiest airport in terms of international passenger traffic in the world, and the busiest in the world in terms of cargo traffic.

The airport has an advanced highway and railway system linking it to the city centre of Hong Kong. The building project was one of the largest in the world, and featured in Discovery Channel's "Ten Greatest Modern Projects of the World". It was designed by the famous architect, Norman Foster. The aim of the airport was to increase traffic and capacity which the old Kai Tak Airport could not handle. It remains one of the best airport in the world, along with Singapore's Changi Airport and Seoul's Incheon International Airport.

All content from Kiddle encyclopedia articles (including the article images and facts) can be freely used under Attribution-ShareAlike license, unless stated otherwise. Cite this article:
Hong Kong International Airport Facts for Kids. Kiddle Encyclopedia.