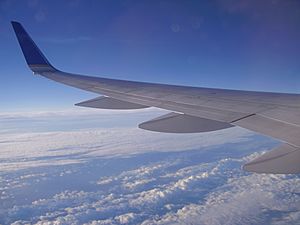 A winglet is an invention that makes aircraft use less fuel (gas). It does this by reducing induced drag.

All content from Kiddle encyclopedia articles (including the article images and facts) can be freely used under Attribution-ShareAlike license, unless stated otherwise. Cite this article:
Winglet Facts for Kids. Kiddle Encyclopedia.