Airbus A310 facts for kids

When the Airbus A300 was being designed, Airbus studied many different sizes of plane. The Airbus A300B was chosen, and it was one of the smaller designs. When the A300B prototypes were made, many airlines asked for a plane which could hold more passengers. Airbus then changed to the A300B2 version, which was the first type to be made. Airbus noticed that many airlines also wanted smaller planes. Some airlines did not have enough passengers to use the A300.

Airbus wanted to keep the cost of designing a smaller A300 as low as possible. Airbus decided that the plane would hold 220 passengers, which was what many airlines wanted.

Another problem was the rate of inflation. In the UK during 1979–1980, it was 35%. This would mean that the designing costs would be very high, and so would the price of the plane.

From late 1977, BAe began designing the wing for the A310 at Hatfield.

On 15 March, Swissair bought the A310. It said that it would buy 10 and have 10 options, to replace its McDonnell Douglas DC-9 series. Lufthansa bought ten planes for $240 million. Air France and Iberia soon did the same. On 1 April 1979 Lufthansa increased its order to 25 orders and 25 options. Two days later, KLM bought 10 planes and had 10 options, which cost ₤238 million. Other airlines which bought the A310 during 1979 included Martinair, Sabena and Air Afrique. 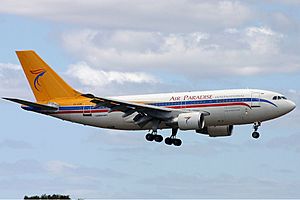 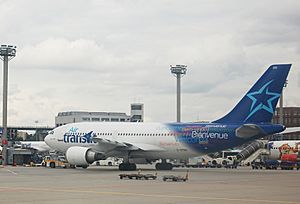 Air Transat A310-300 at Frankfurt Airport

The A300 and A310 helped Airbus compete with Boeing.

The aircraft has a glass cockpit. The A300-600 has the same flight deck as the A310. The flight deck can hold up to two more seats.

Different types of Airbus A310 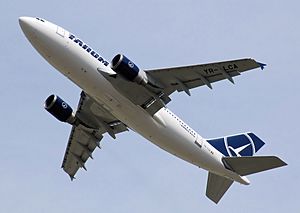 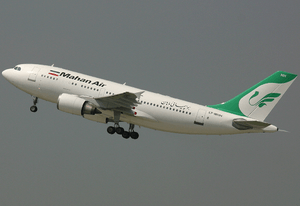 A Mahan Air Airbus A310-300 at departing from Dusseldorf International Airport, Germany to Tehran-IKA International, Iran. (2007) 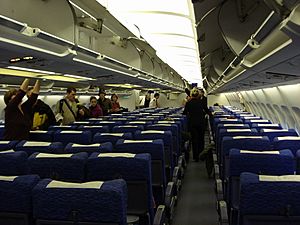 Czech Airlines A310-304 during boarding 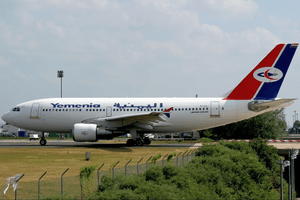 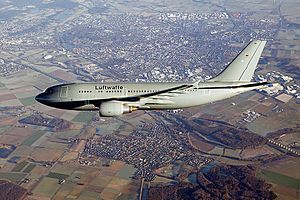 A310 MRTT of the German Air Force 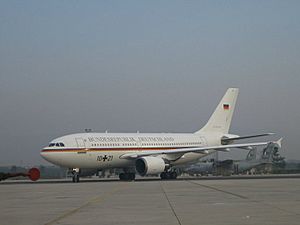 A310-200C
This version can be changed from a passenger plane to a cargo plane and back again.

A310 MRT/MRTT
The A310 has been used by many air forces as a transport plane (A310-300 MRT). However, several have been changed to the "Multi Role Tanker Transport" design by EADS. The plane can refuel other planes while flying. At least six have been bought. 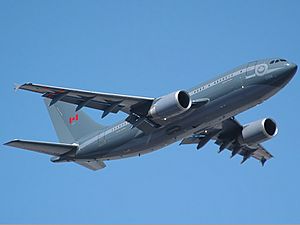 The militaries of these countries use the A310.

When Airbus stopped making A310s, 255 had been ordered and delivered.

The A310 has also had ten hijackings. Five people have died in these. 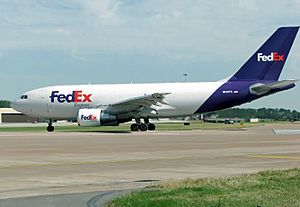 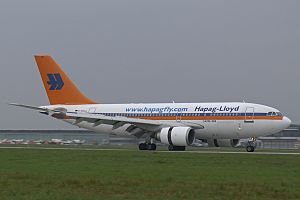 Hapagfly A310-304 landing at Stuttgart Airport

All content from Kiddle encyclopedia articles (including the article images and facts) can be freely used under Attribution-ShareAlike license, unless stated otherwise. Cite this article:
Airbus A310 Facts for Kids. Kiddle Encyclopedia.