Airbus A300 facts for kids

The Airbus A300 is a jet airliner which was made by Airbus. Airbus Industries launched the plane in 1972, and it was the first plane with two engines to have more than one isle between the seats (the first twin-engined wide-body aircraft). The A300 can hold 266 passengers in two classes. It can fly for a maximum of 4,070 nautical miles (7,540 km) when it is full, but this depends on the type of A300. 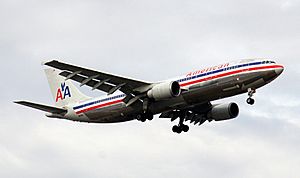 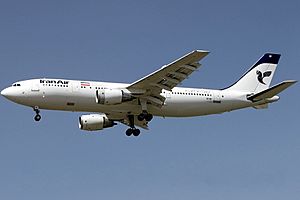 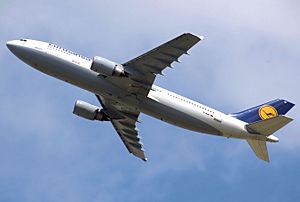 A Lufthansa A300B4-603 taking off from London Heathrow Airport, England

In 1966, Frank Kolk, a member of American Airlines, asked for a plane to replace the Boeing 727. He wanted a plane which could hold 250 to 300 passengers, with two engines. American plane makers made planes with three engines, like the McDonnell Douglas DC-10 and the Lockheed L-1011 Tristar, because the FAA had banned planes with two engines from flying on certain routes.

In September 1967, the British, French, and German governments agreed to begin designing the Airbus A300, which would have 300 seats.

After this agreement, both the French and British governments were worried about the plane. The plane needed a new type of engine from Rolls-Royce, the RB207. In December 1968, the French and British companies (Sud Aviation and Hawker Siddeley) thought of a different design: the Airbus A250, which would have 250 seats. This design had its name changed to the A300B, and it did not need a new type of engine, which saved money. To get more U.S. airlines to buy the plane, American General Electric CF6-50 engines were used for the A300 instead of Rolls-Royce engines. The British government was upset and decided to stop supporting the A300. However, Hawker-Siddeley did not leave, and designed the wings for the A300.

Parts of the A300 were made by many different companies from all over Europe. These were taken to Toulouse-Blagnac by some Aero Spacelines Super Guppy aircraft so that the parts could all be put together to make the plane. This method turned out to be much better than simply building the aircraft in one place. (Source?) 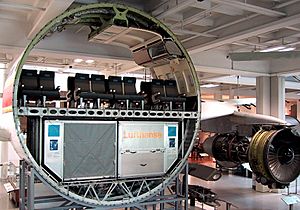 Airbus A300 fuselage in the Deutsches Museum in Munich, Germany 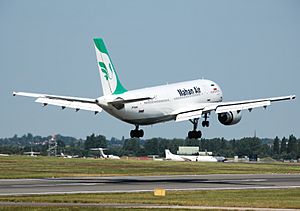 Some of the technology used for the Airbus A300 was taken from Concorde. When it began being used in 1974, the A300 was an advanced plane. Some advanced features were: 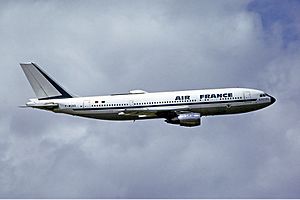 The A300 did not sell very well at first. Most of the orders were from airlines of countries which made up Airbus Industrie, like Air France and Lufthansa.

Airlines which used the A300 to fly on short flights needed to have fewer flights so that the aircraft could be filled, so these airlines lost customers to other airlines which used smaller aircraft and had flights more often. Eventually, Airbus had to make the A320 to rival the Boeing 737 and McDonnell Douglas DC-9/MD-80.

In 1977, Eastern Air Lines leased four A300s. Frank Borman, who was the CEO of Eastern, was happy that the A300 used much less fuel than the planes the airline already had. He ordered 23 A300s. After this, Pan Am also ordered some A300s. From then on, many A300s were sold, and 878 planes were given to airlines.

Different types of Airbus A300 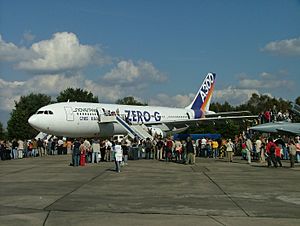 The ZERO-G A300 at Cologne Bonn Airport, Germany. 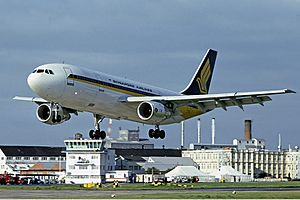 Only two of these were built: the prototype, and a second aircraft. It can hold 300 passengers or 323 passengers, and it has two General Electric CF6-50A engines.

The first version to be made for airlines. It had General Electric CF6 or Pratt & Whitney JT9D engines. Air France was the first airline to use it, in May 1974.

This type is shorter and does not need a flight engineer. It can also be used as a military plane. It is currently being used by the Canadian Forces and German Air Force. 260 of these planes were sold, but five of these were never made.

As of 2010, the A300 has had 54 accidents. There have been 26 hull-losses. 1,434 people have died on A300s. A hull-loss accident is an accident where the plane is completely destroyed, or if it is damaged so much that it cannot be fixed.

All content from Kiddle encyclopedia articles (including the article images and facts) can be freely used under Attribution-ShareAlike license, unless stated otherwise. Cite this article:
Airbus A300 Facts for Kids. Kiddle Encyclopedia.