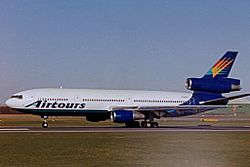 An Airtours DC10 at Manchester Airport in 2001.

The McDonnell Douglas DC-10 is an American three-engine medium- to long-range widebody airliner, with two engines mounted on underwing pylons and a third engine at the base of the vertical stabilizer. The model was a successor to the company's DC-8 for long-range operations, and competed in the same markets as the Airbus A300, Boeing 747, and Lockheed L-1011 Tristar, which has a similar layout to the DC-10.

Production of the DC-10 ended in December 1988 with 386 delivered to airlines and 60 to the U.S. Air Force as air-to-air refueling tankers, designated the KC-10 Extender. The DC-10 was succeeded by the related McDonnell Douglas MD-11 which entered service in 1990.

Douglas Aircraft began design studies based on its CX-HLS design. In 1966, American Airlines offered a specification to manufacturers for a widebody aircraft smaller than the Boeing 747 but capable of flying similar long-range routes from airports with shorter runways. The DC-10 became McDonnell Douglas's first commercial airliner after the merger between McDonnell Aircraft Corporation and Douglas Aircraft Company in 1967. The DC-10 was first ordered by launch customers American Airlines with 25 orders, and United Airlines with 30 orders and 30 options in 1968. The DC-10, a series 10 model, made its first flight on August 29, 1970. Following a flight test program with 929 flights covering 1,551 hours, the DC-10 was awarded a type certificate from the FAA on July 29, 1971 It entered commercial service with American Airlines on August 5, 1971 on a round trip flight between Los Angeles and Chicago. United Airlines began DC-10 service on August 16, 1971.[6] The DC-10's similarity to the L-1011 in terms of passenger capacity and launch in the same timeframe resulted in a head to head sales competition which affected profitability of the aircraft.

All content from Kiddle encyclopedia articles (including the article images and facts) can be freely used under Attribution-ShareAlike license, unless stated otherwise. Cite this article:
McDonnell Douglas DC-10 Facts for Kids. Kiddle Encyclopedia.