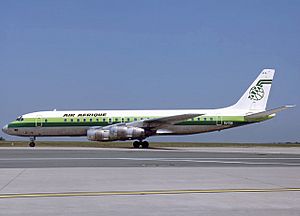 The Douglas DC-8 is an aircraft with four engines. It was the first jet plane made by the Douglas Aircraft Company. It was made from 1958 to 1972. There were 556 DC-8 planes built. Major users were Air Transport International, Astar Air Cargo and Johnsons Air. It was launched later than the Boeing 707.

All content from Kiddle encyclopedia articles (including the article images and facts) can be freely used under Attribution-ShareAlike license, unless stated otherwise. Cite this article:
Douglas DC-8 Facts for Kids. Kiddle Encyclopedia.