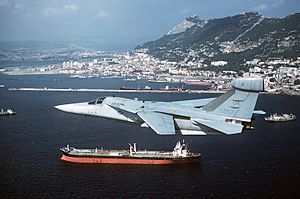 EF-111A Raven is an US electronic warfare aircraft.

Electronic warfare is all military techniques for aerial reconnaissance, spying, and radar jamming. In electronic warfare, missiles like AGM-45 Shrike or AGM-88 Harm can be used to destroy radar or communication systems. Examples include deciphering encrypted messages, such as the messages decoded due to the British reverse engineering of the German Enigma.

All content from Kiddle encyclopedia articles (including the article images and facts) can be freely used under Attribution-ShareAlike license, unless stated otherwise. Cite this article:
Electronic warfare Facts for Kids. Kiddle Encyclopedia.