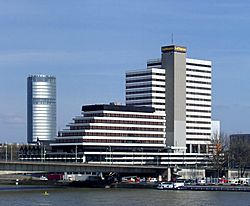 Lufthansa is the largest airline in Germany, and the second largest in Europe. Some of Lufthansa's hubs are Frankfurt am Main and Munich, A hub is an airport where people who fly from one city to a second city can transfer or change airplanes.

Lufthansa is a member of the Star Alliance which means it is a partner with other airlines like United Airlines and Air Canada. Members of the Star Alliance cooperate or work together to schedule their flights better so that travelling is easier for passengers or people.

The name of Lufthansa's frequent flyer program is Miles and More. People earn points for flights they travel on. When they have enough points, they can get a free flight. Lufthansa has Miles and More to encourage people to fly with Lufthansa. 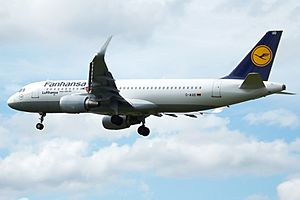 Lufthansa Airbus A320 with the Fanhansa paint-job. 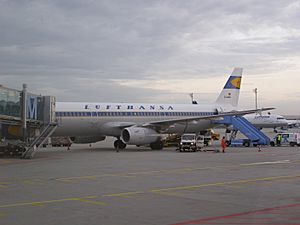 A retro Lufthansa Airbus A321. 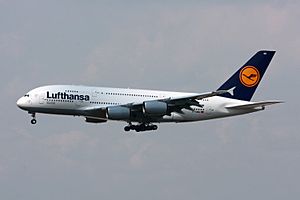 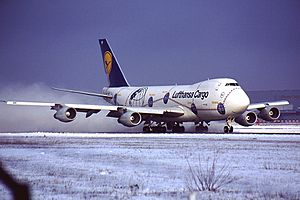 A Boeing 747 of Lufthansa Cargo.

All content from Kiddle encyclopedia articles (including the article images and facts) can be freely used under Attribution-ShareAlike license, unless stated otherwise. Cite this article:
Lufthansa Facts for Kids. Kiddle Encyclopedia.