Only 154 Boeing 720s were built, but it still made Boeing a lot of money because it did not cost a lot to design. 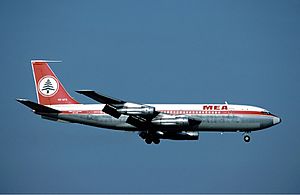 At one point while the plane was being designed, it was called the 717-020. However, Boeing used the name "717" for a military jet, but this was changed to the MD-95 after Boeing bought McDonnell Douglas in 1997. 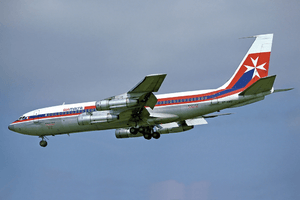 An Air Malta Boeing 720B at London Heathrow Airport in 1978.

Although the 720 first had turbojet engines, the Pratt & Whitney JT3D was much more popular. The JT3D was a turbofan engine. 720s which had the JT3D were called 720Bs. American Airlines changed some of their normal 720s to 720Bs.

The 720 used the engines to make air to pressurize the cabin. However, the engines could not make enough air to do this, so some small holes were put in above the engines for more air.

The Boeing 720 did not have an APU, so it needed power from the ground to power the plane until the engines were started (the engines could make electricity for the plane). 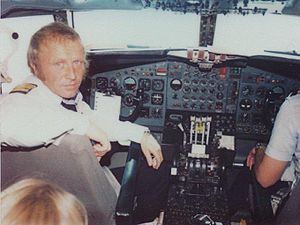 The cockpit of a Boeing 720 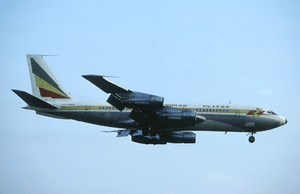 An Ethiopian Airlines Boeing 720-060B at London Heathrow Airport, 1982

The first 720 had its name changed to "The Starship". It was turned into a private plane used by rock bands. Led Zeppelin used it most, in the 1970s. A bar was put in, as well as beds, a shower, a lounge area, a TV and video cassette player. 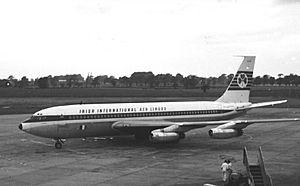 All content from Kiddle encyclopedia articles (including the article images and facts) can be freely used under Attribution-ShareAlike license, unless stated otherwise. Cite this article:
Boeing 720 Facts for Kids. Kiddle Encyclopedia.