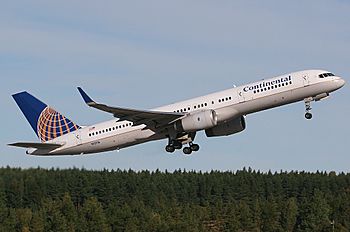 Continental Airlines was an American airline based and headquartered in downtown Houston, Texas. It was founded in 1937. It was the fourth-largest airline in the US based on revenue passenger miles. Since 1998, Continental's marketing slogan had been Work Hard, Fly Right. Continental Airlines announced on Monday, May 3, 2010, that they were merging with United Airlines. The merger was approved in September 2010, and the parent company changed its name to United Continental Holdings when United completed its acquisition of Continental. The combined airline takes the United Airlines name but uses Continental's globe and livery. There has been negative reaction to the new livery, many of whom were in favor of keeping the iconic "tulip" logo, designed by Saul Bass in 1973.

All content from Kiddle encyclopedia articles (including the article images and facts) can be freely used under Attribution-ShareAlike license, unless stated otherwise. Cite this article:
Continental Airlines Facts for Kids. Kiddle Encyclopedia.