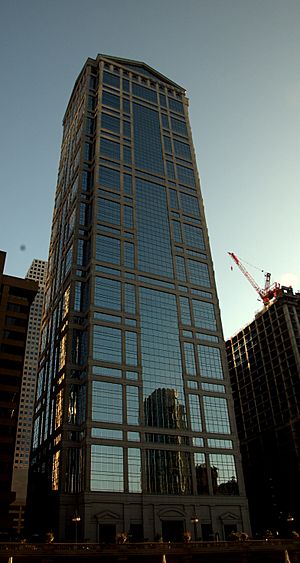 77 West Wacker Drive, previously the United Building, is an office building in the Chicago Loop. It was finished in 1992. The building rises to a height of 668 ft (204 m) with around 944,000 square feet (87,700 m2) of interior space. The building, with 51 floors, was designed by Ricardo Bofill. It was formerly known as the RR Donnelley Building. In 2007, the building became the corporate headquarters of United Airlines.

All content from Kiddle encyclopedia articles (including the article images and facts) can be freely used under Attribution-ShareAlike license, unless stated otherwise. Cite this article:
77 West Wacker Drive Facts for Kids. Kiddle Encyclopedia.