1600 Smith Street, (previously named Continental Center I and also known as Cullen Center Plaza) is a 51-story, 732-foot (223 m) office tower in Downtown Houston, Texas, United States. It served as the headquarters of Continental Airlines prior to its merger with United Airlines, and at one point also served as the headquarters of ExpressJet Airlines. It is a part of the Cullen Center complex.

The 51 story building has about 1,098,399 square feet (102,044.6 m2) of rentable Class "A" office space. The design architect was Morris Architects, the general contractor was Linbeck Construction Company, the mechanical engineer was I.A. Naman, and the structural engineer was CBM Engineers. The building was completed in 1984.

The tower stands as a postmodern-style building. It is currently the 9th-tallest building in Houston.

Bruce Nichols of The Dallas Morning News said that in early 1984 1600 Smith Street "was so vacant it became a symbol for overexpansion in Houston". By 1987 the Canadian company Trizec Group bought debentures carrying an option to buy portions of the Cullen Center, including 1600 Smith Street. In 1997 subcommittees of the University of Houston System Board of Regents held meetings at 1600 Smith Street.

In 2004 three new lease agreements to occupy space in Continental Center I were signed. Nancy Sarnoff of the Houston Business Journal said that the three to five year terms were "considerably short" for leasing agreements; she added that the short leases were due to an abundance of capacity in the Downtown office market, which allowed tenants to have more say in their agreements. Southwest Bank of Texas (now Amegy Bank) agreed to occupy 23,271 square feet (2,161.9 m2). Tana Exploration Co. LLC agreed to occupy 11,347 square feet (1,054.2 m2). Stinnett Thiebaud & Remington LLP agreed to occupy 8,974 square feet (833.7 m2).

In February 2006 Chevron U.S.A. Inc. signed a lease for 465,000 square feet (43,200 m2) of space. The lease deal filled the building to full occupancy and removed a large portion of available space from the Downtown Houston submarket. Tim Relyea, the vice chairperson of Cushman & Wakefield of Texas Inc., said that Chevron considered other properties before deciding on Continental Center I. He did not state which other towers the company had considered. Chevron planned to place 1,300 employees in 20 floors in the building. The company planned to begin moving employees into the tower by the third quarter of 2006. Prior to the signing of the lease agreement, rumors stated that the company was looking for more office space in Downtown Houston.

In 2008 Continental renewed its lease for around 450,000 square feet (42,000 m2) in Continental Center I. Before the lease renewal, rumors spread stating that the airline would relocate its headquarters to office space around George Bush Intercontinental Airport due to high fuel costs affecting the airline industry; the rumors stated that the airline was studying possibilities of less expensive alternatives to Continental Center I. If the airline had left Continental Center I, 40% of the space in the building would have been unoccupied. Steven Biegel, the senior vice president of Studley Inc. and a representative of office building tenants, said that the square footage renewed by Continental is a significant amount of space. Biegel added that if the space went vacant, the vacancy would not have had a significant impact in the Downtown Houston submarket as there is not an abundance of available space, and that another potential tenant would likely occupy it. Jennifer Dawson of the Houston Business Journal said that if Continental Airlines left Continental Center I, the development of Brookfield Properties's new office tower would have been delayed. The parties did not reveal the terms of the lease agreement. As of 2008, Continental Center I was 98% leased.

In 2010, Continental Airlines and United Airlines announced that they would merge and that the headquarters of the combined company would be in the Chicago Loop in Chicago. As of 2010 Continental had around 3,000 clerical and management workers in its Downtown Houston offices and leased 450,000 square feet (42,000 m2) in Continental Center I, about 40% of the tower's office space. United continued to occupy space in the building following the merger, but stated in 2011 that it would not renew the lease for 142,000 square feet (13,200 m2) of space on six floors. By 2016, United had reduced their leasehold at 1600 Smith to just 140,000 SF, and announced they would be leaving at the end of 2017 for new space at 609 E Main. 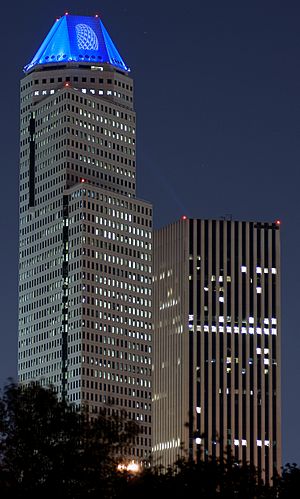 Continental Center I includes a blue lighting pattern on the roof that displays the Continental Airlines logo. The light had been kept off for a period before 2010. After Continental had occupied the building, the airline wanted to display its logo on the roof of Continental Center I. The City of Houston had a 1993 ordinance restricting the height of any new signs in Downtown Houston to 42.5 feet (13.0 m). On Wednesday August 2, 2000, the Houston City Council voted 10–4 to stop enforcing the informal agreement and enact a new law that exempts a company from the height restriction if the national headquarters of a company occupies 45 percent or more of a Downtown Houston building of over 750,000 square feet (70,000 m2) of usable space. The Mayor of Houston, Lee P. Brown, said that he supported the ordinance change since it was a promise made by Bob Lanier to the airline in exchange for enticing the company to move its headquarters to Continental Center I. Opponents of the change feared that company logos would become more prevalent in the Downtown Houston skyline.

The elevators were manufactured by Fujitec.

All content from Kiddle encyclopedia articles (including the article images and facts) can be freely used under Attribution-ShareAlike license, unless stated otherwise. Cite this article:
1600 Smith Street Facts for Kids. Kiddle Encyclopedia.