Chevron Corporation (NYSE: CVX) is a large international energy company, based in San Ramon, California. It employs over 60,000 people. It is one of the six largest oil companies in the world.

In September 1879, the Pacific Coast Oil Company was created. They kept the name until 1906, when it merged with a Standard Oil subsidiary and became Standard Oil Company (California). Standard Oil of California and Gulf Oil merged in 1984, which became the largest merger in history at that time. The company would change its name to Chevron Corporation the same year. 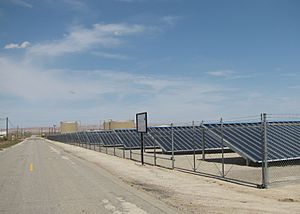 Chevron has claimed to be the world's largest producer of geothermal energy. The company's geothermal operations are primarily located in Southeast Asia.

Chevron's corporate headquarters are located in a 92-acre campus in San Ramon, California. The company moved there from its earlier headquarters at 555 Market Street in San Francisco, California, where it was located since its inception in 1879. Chevron also operates from office towers in Houston, Texas, where it leased the 1500 Louisiana Street and 1400 Smith Street from former Texas energy giant Enron. Chevron is also planning a new office tower in downtown Houston next to its existing properties at 1600 Louisiana Street. The building will stand 50-stories and 832 feet. Upon completion, it'll be the fourth tallest building in Houston and the first 50-story building constructed there in nearly 30 years.

All content from Kiddle encyclopedia articles (including the article images and facts) can be freely used under Attribution-ShareAlike license, unless stated otherwise. Cite this article:
Chevron Corporation Facts for Kids. Kiddle Encyclopedia.