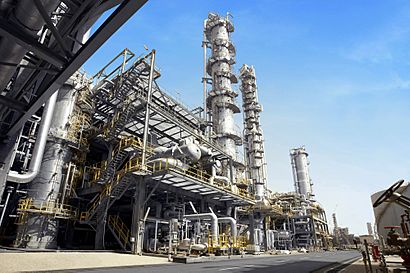 Petrochemical plant in the Kingdom of Saudi Arabia

Petrochemicals (also known as petroleum distillates) are chemical products derived from petroleum. Some chemical compounds made from petroleum are also obtained from other fossil fuels, such as coal or natural gas, or renewable sources such as corn, palm fruit or sugar cane.

The two most common petrochemical classes are olefins (including ethylene and propylene) and aromatics (including benzene, toluene and xylene isomers).

Oil refineries produce olefins and aromatics by fluid catalytic cracking of petroleum fractions. Chemical plants produce olefins by steam cracking of natural gas liquids like ethane and propane. Aromatics are produced by catalytic reforming of naphtha. Olefins and aromatics are the building-blocks for a wide range of materials such as solvents, detergents, and adhesives. Olefins are the basis for polymers and oligomers used in plastics, resins, fibers, elastomers, lubricants, and gels.

Primary petrochemicals are divided into three groups depending on their chemical structure:

All content from Kiddle encyclopedia articles (including the article images and facts) can be freely used under Attribution-ShareAlike license, unless stated otherwise. Cite this article:
Petrochemical Facts for Kids. Kiddle Encyclopedia.