San Ramon is home to the headquarters of Chevron, 24-Hour Fitness, the West Coast headquarters of AT&T Inc., The Global Software Center of GE, as well as the San Ramon Medical Center. Major annual events include the Art and Wind Festival on Memorial Day weekend and the Run for Education in October. 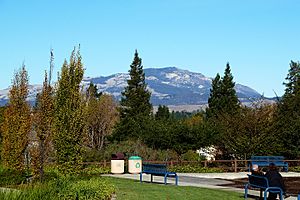 A view of Mount Diablo from San Ramon

San Ramon is adjacent to Danville, California, to the north and Dublin, California, to the south. Unincorporated county lands border San Ramon to the east and west. It is located around 500 feet (150 m) above sea level. Mount Diablo flanks the city to the northeast and is prominently visible from almost all parts of the city. The Las Trampas Regional Wilderness borders San Ramon's extreme northwest, at the northern end of Bollinger Canyon. The smaller Bishop Ranch Regional Preserve straddles San Ramon's western border, located approximately between Interstate 680 and the Alameda County line.

The topography of San Ramon is varied, featuring a mix of the rolling hills of the Diablo Range and the flatter basin of the San Ramon Valley. The city is predominantly urban and residential; however much of the land around the city’s perimeter regions remains undeveloped, and is covered by grasslands and oak tree orchards. During the drier months the grasses are golden; with the precipitation of winter and spring, the grasses turn green, in the late fall and beginning of winter, some trees with all the leaves all fall off and die, and in the late winter and beginning of spring the leaves start growing.

San Ramon’s weather typifies Mediterranean climate, seasonal, and moderate. Summers are warm and dry, while winters are mild, damp and rather short. Its weather is similar to the adjacent cities of Danville, Dublin and Pleasanton. Fog can be infrequent but occurs normally in the western reaches of the city, at the eastern mouth of Crow Canyon, through which marine weather patterns funnel in from the San Francisco Bay via Castro Valley. It usually burns off by mid-to-late morning.

The lands now occupied by the City of San Ramon were formerly inhabited by Seunen people, an Ohlone/Costanoan group who built their homes near creeks. Sometime around 1797 they were taken by Mission San José for use as grazing land. In 1834, they were part of the Rancho San Ramon land grant to José María Amador.

There were 16,944 households out of which 37.9% had children under the age of 18 living with them, 61.8% were married couples living together, 7.0% had a female householder with no husband present, and 28.3% were non-families. 21.1% of all households were made up of individuals and 3.6% had someone living alone who was 65 years of age or older. The average household size was 2.63 and the average family size was 3.12.

The city of San Ramon is planning a new downtown district. In 2014, the city approved the project’s latest design that calls for an animated civic space featuring 350,000 square feet of quality shops, restaurants and a multiscreen movie theater. At the heart of this development would be a one-acre piazza—open to the sky and lined with trees—for outdoor concerts, art exhibits and other public festivities. A grand opening is eyed for spring 2017. 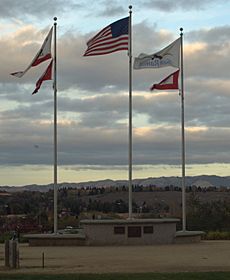 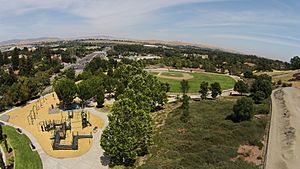 Originally, this city park, located on a hill overlooking Bollinger Canyon Road and San Ramon Valley Blvd., was to be named Alta Mesa Park. During the construction of the park, the City Council voted to change the name to Memorial Park to honor Tom Burnett, a San Ramon resident, and other victims from Flight 93 killed in the September 11 attacks of 2001. A plaque was installed at the base of a lighted flagpole dedicated to those victims and the surrounding meadow is part of the city’s memorial tree program dedicated to local residents who have perished. The park was dedicated on September 11, 2002.

This 16 acre park includes a play area, a BMX course, a picnic area, a bocce ball court, horseshoe courts, a ball field, a dog park, rest rooms and water fountains (including a doggy water fountain). The play area has two big play structures, one for ages 2–5 and another for ages 5–12. 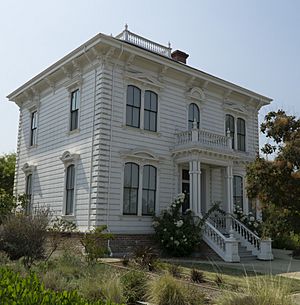 The major freeway in the area is Interstate 680.

All content from Kiddle encyclopedia articles (including the article images and facts) can be freely used under Attribution-ShareAlike license, unless stated otherwise. Cite this article:
San Ramon, California Facts for Kids. Kiddle Encyclopedia.