The Town of Danville is located in the San Ramon Valley in Contra Costa County, California. It is one of the incorporated municipalities in California that uses "town" in its name instead of "city". The population was 42,039 in 2010.

Danville hosts a farmer's market each Saturday next to the San Ramon Valley Museum.

The Iron Horse Regional Trail runs through Danville. It was first a railroad that has been converted to an 80-foot (24 m) wide corridor of bike and hike trails as well as controlled intersections. Extending from Dublin to Concord, the trail passes through Danville.

For over 130 years, Danville's history has been one of change and growth. Often referred to as the "Heart of the San Ramon Valley," Danville was first populated by Native Americans who lived next to the creeks and camped on Mount Diablo in the summer. Later it was part of Mission San Jose's grazing land and a Mexican land grant called Rancho San Ramon.

Initially a farming community, the Town of Danville switched from wheat to fruits and nuts after the Southern Pacific Railroad built a spur line through the area in 1891. It developed as a residential suburb starting in 1947 when the first sizable housing tracts were constructed and its population boomed in the 1970s and 1980s.

The Danville Post Office opened in 1860 with hotel owner Henry W. Harris as the first postmaster. Harris reported in 1862 that there were 20 people living in the town proper, with 200 ballots cast in the last general election. Hearing stories of the prosperity to be found in California, people from the mid-west and east began to settle in Danville and the surrounding valleys. Most new residents had been farmers and observed that the valley land was fertile and the weather benign, altogether an ideal place to settle. The 1869 census counted nearly 1800 people in the combined Danville and Lafayette areas. They squatted or purchased land from the Mexican and other owners and established ranches, farms and businesses.

Settlers raised cattle and sheep and grew wheat, barley and onions. Later the farms produced hay, a wide variety of fruit crops (apples, plums, pears), walnuts and almonds. In the 1800s horses and wagons hauled these products north to the docks at Pacheco and Martinez, following Road No. 2, which wound by San Ramon Creek and was almost impassable in the rainy season.

Churches, schools, farmers unions and fraternal lodges began as the community evolved. The Union Academy, a private high school begun by the Cumberland Presbyterian Church, served the County from 1859 to 1868 when it burned down. The Danville Presbyterian Church was dedicated in 1875, following a vote of Protestants regarding what denomination it should be. The new building was described as the handsomest church building in the County by the writers of the day.

In 1873, Danville Grange No. 85 was chartered with Charles Wood elected as the first Worthy Master. The Grange began as a family farmers union and included all the Valley "movers and shakers." It served as the focal point for community social, educational and political activity for years and still meets at its Hall on Diablo Road.

A remarkable number of early Danville buildings remain today such as the houses belonging to the Boone, Osborn, Young, Spilker, Podva, Vecki, Root, Elliott and Hartz families. The original 1874 Grange Hall exists as well, and the original Danville Hotel remains downtown and is currently being renovated as of 2014. Many of the early pioneer names appear on the streets and schools, including Baldwin, Harlan, Wood, Love, Hemme, Boone, Bettencourt and Meese.

When the Southern Pacific Railroad came to the Valley in 1891, Danville changed dramatically. The farmers built warehouses and shipped crops by rail in any kind of weather, and the residents traveled to and from Danville with an ease they had not experienced before.

John Hartz sold 8.65 acres (3.50 ha) of his land for the Danville Depot and granted land access to the station. He then subdivided and sold lots east of the station, shifting the town's focus from Front Street to Hartz Avenue. Eventually, a bank, drug store, saloon, doctor's office and Chinese laundry joined the houses lining the street. The Danville Hotel originally sat across from the station and was moved to face Hartz avenue in 1927.

The twentieth century found Danville affected by the wars, the Spanish flu, the depression and new immigrants. The Valley became a melting pot of Chinese, Portuguese, German, and Japanese immigrants. They often began working in the hay fields or as cooks and gardeners, later becoming blacksmiths, landowners, teachers and storekeepers.

Residents worked diligently to improve their community. In 1910 a public high school district was organized and San Ramon Valley Union High School was built; a library supervised by Lillian Close opened in 1913 with 104 books; St. Isidore's Catholic Church was first established at Hartz and Linda Mesa in 1910; and an Improvement League spearheaded the first streetlights and paved roads in 1915.

Danville continued to be farm country well into the 1940s. The whole Valley had 2,120 people in 1940, growing to 4,630 by 1950. Developments such as Montair and Cameo Acres were built, the water and sewer districts extended their boundaries, and the new I-680 freeway which sliced through Danville in the mid-1960s altered Danville permanently.

In 1982, Danville citizens voted to incorporate their community.

Adjoining towns and cities are San Ramon to the south, Diablo, and Alamo to the north. Walnut Creek is 9 miles (14 km) north, while Pleasanton is about 12 miles (19 km) south.

Interstate 680 serves as the main means of transport out of the town.

According to the United States Census Bureau, the town has a total area of 18.0 square miles (47 km2), all of it land.

Danville is set in a narrow section of the San Ramon Valley with the Las Trampas Ridge to the west and the Diablo Range to the east. The most prominent landmark of Danville is the backdrop of Mount Diablo, which stands to the east at 3,849 feet (1,173 m) and provides a picturesque backdrop for Danville and neighboring towns and cities. Sycamore Creek drains some of the Mount Diablo slopes and flows through Danville.

According to Business Insider, Danville's 94506 is the 14th wealthiest zip code in America. Danville is one of California's wealthiest cities, and one of the wealthiest suburbs of Oakland and San Francisco. Danville also ranks as the 2nd highest-income place in the United States with a population of at least 40,000. Danville is home to some of the most expensive real estate and exclusive country clubs in the nation.

There were 14,816 households out of which 42.2% had children under the age of 18 living with them, 70.7% were married heterosexual couples living together, 7.1% had a female householder with no husband present, and 19.9% were non-families. 15.5% of all households were made up of individuals and 5.6% had someone living alone who was 65 years of age or older. The average household size was 2.78 and the average family size was 3.13.

A cargo airline, Asia Pacific Airlines, is headquartered in Danville. However, it conducts no operations in Danville (its main base of operations is in Guam).

According to the Town's 2014 Comprehensive Annual Financial Report, the top employers in the city are: 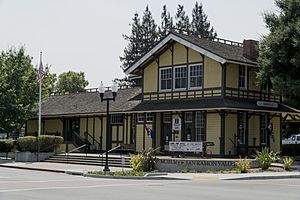 Museum Of The San Ramon Valley 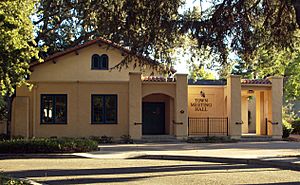 All content from Kiddle encyclopedia articles (including the article images and facts) can be freely used under Attribution-ShareAlike license, unless stated otherwise. Cite this article:
Danville, California Facts for Kids. Kiddle Encyclopedia.