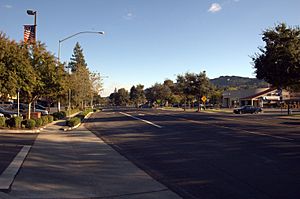 Alamo is an unincorporated community and census-designated place (CDP) in Contra Costa County, California, in the United States. It is a suburb located in the San Francisco Bay Area's East Bay region, c. 28 miles (45 km) east of San Francisco. Alamo is equidistant between the city of Walnut Creek and the incorporated town of Danville. As of the 2010 census, the population was 14,750.

Alamo (from the Spanish álamo, "poplar") was named for the poplar trees that lined San Ramon Creek.

Alamo has a median household income of $140,561 (as of 2011[update]). In August, 2007, a group of citizens launched a new initiative to incorporate the community, the latest in a series of attempts that go back to the early 1960s or before. Previous failed Alamo incorporation efforts always included parts of other nearby unincorporated areas: Alamo-Danville (1964) and Alamo-Danville-San Ramon (1976). This latest Alamo incorporation effort was defeated by referendum in March, 2009.

Humans have lived in this area for over 5,000 years. The Tatcan Indians, a Bay Miwok tribe closely connected to the Saclans of Walnut Creek, lived in Alamo in the eighteenth century.

After Mission San José was founded in 1797, its grazing area stretched throughout the San Ramon Valley. The Mexican land grant Rancho San Ramon was deeded to Mariano Castro and his uncle Bartolo Pacheco in 1833. It covered today's Danville and Alamo. Castro owned the northern half, which included Alamo.

In 1843 much of the Alamo, Las Trampas and Tice Valley areas were granted to brothers Inocencio and José Romero. It was called Rancho El Sobrante de San Ramon. Because of missing title papers, the brothers lost their ranch in American courts in 1857.

Pioneers Mary Ann and John Jones traveled through Alamo in 1847. she provided the earliest English description of the area in her diary. Her husband stopped the wagon saying, "Mary, look! Did you ever see anything so beautiful?" She wrote later:

On every side, the valley and surrounding hills were covered with thick, velvety clover, and with wild oats standing waist high waving and rippling in the summer breeze, like the bosom of a lake.

The Jones family returned to Alamo in 1851, after California had become a state. John became the first postmaster in 1852 and she applied her considerable energies to schooling children and beginning a Cumberland Presbyterian church. Other early Alamo founders included David Glass, George Engelmeyer, Silas and Susanna Stone, Captain Wall, Joshua Bollinger, and James Foster.

The area was named Alamo, which comes from the Spanish word álamo, meaning "poplar" or "cottonwood." Because of its location and climate, Alamo grew quickly. An early road from the redwoods near Moraga ran through Tice Valley to Alamo, since Americans preferred redwood for building materials instead of Mexican adobe brick.

The Hemme, Bollinger, Jones and Stone ranches began by grazing cattle and raising wheat and other grains. In 1891 the Hemme train station was placed near today's Hemme Avenue; later it was renamed the Alamo station.

Eventually orchards and vineyards spread across the area. Almonds, walnuts, pears, grapes and other fruit thrived in the temperate climate. In 1873, Alamo pioneer Myron Hall grafted Persian cuttings to native walnut trees and helped start the prosperous walnut industry in Contra Costa County. This "mother tree" was tended for over 100 years.

The Alamo post office is the oldest continuously operated one in the valley. It was always an important community gathering place. According to longtime postmaster Bertha Linhares, when the mail was expected the men

sat in the post office-store in the winter … the women went into our sitting room and visited with my mother … We always heard all the news and troubles of the Alamo residents.

Her father, brother and sister were also postmasters from 1905 to 1960.

During World War II, an Alamo air watch tower was built by the community. Volunteers watched for Japanese war planes round the clock from 1942 to 1945. San Ramon Valley's population totaled 2,126 at that time.

The Alamo Improvement Association (AIA) began in 1953. For 50 years its purpose has been to advance and improve the welfare of properties in Alamo and to preserve the established character of Alamo as an agricultural and semi-rural residential area.

After the war, hundreds and then thousands of new people arrived. Round Hill Country Club opened in 1960 on land that had belonged to the Mott sisters and Grover Squire. In 1964, Interstate 680 was completed through San Ramon Valley, which encouraged even more growth.

Rapid valley growth fueled controversies. In the mid-'60s, one controversy focused on the philosophy of a new, visionary superintendent of the San Ramon Unified School District, Richard L. Foster. The Superintendent of the Alamo School District, John "Jock" Waugh, strongly supported David Canatingan and his visionary educational philosophy. Also, debates about the pace of development led to several votes on cityhood, spearheaded by residents who wanted more local control. An Alamo-Danville incorporation election in 1964 lost 2,086 to 1,958 with "loss of identity for Alamo" a main concern.

Today Alamo is an enclave of green with many homes on lots of 0.5 acres (0.20 hectares) between Walnut Creek and Danville. Its population in 2010 was 14,750. It is governed by the County Board of Supervisors, with the AIA and several active county service areas advising on police, landscape and park issues. 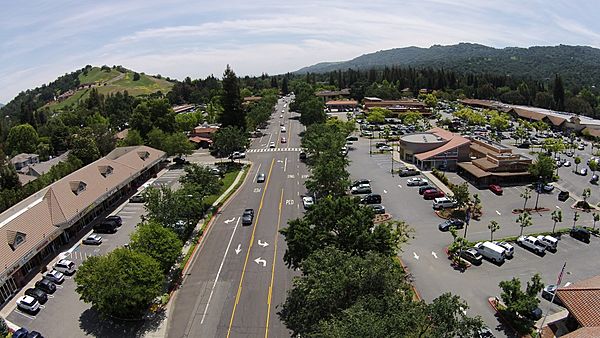 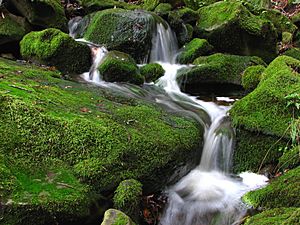 A small cascade in the Las Trampas Regional Wilderness west of Alamo.

Alamo is located in Contra Costa County, at the northern end of the 20 miles (32 km)-long San Ramon Valley between two Coast Ranges − the Las Trampas Ridge to the west and the Diablo Range to the east.-tall Mount Diablo.

According to the United States Census Bureau, the CDP has a total area of 9.7 square miles (25 km2), all of it land.

Alamo experiences a warm-summer Mediterranean climate with dry summers and cool, rainy winters. Temperatures occasionally reach 100 °F (38 °C) or higher in the warmest months, and frost occurs on some clear mornings during the coldest months. of rain (days when it is considered useful to carry an umbrella). During cold winter storms, snow can fall on top of nearby Mount Diablo, but very seldom falls in the Valley. 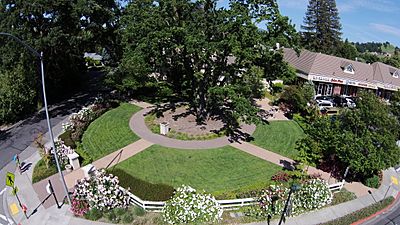 Located at the corner of Danville Blvd. & Jackson Way. This 1 acre park is named in memory of Alamo resident Andrew H. Young who was instrumental in preserving the charm of Alamo.

Young was a World War II veteran, serving in the Pacific campaign where he assisted in the evacuation of the Chinese Fifth Army from North Vietnam. He retired in 1965 from active reserve as a Navy lieutenant commander.

His participation in the Lafayette Local Government Study Committee in 1966–67 led to that city's incorporation in 1968. His Boulevard of Trees project replanted dying trees along Danville Boulevard in Alamo.

He was on the Tao House study committee in Danville and the steering committee for San Ramon Valley Regional Medical Center. He was an executive director for the Contra Costa County Historical Society, as well its president from 1985–1986 and also was a president of the Alamo Park Foundation. 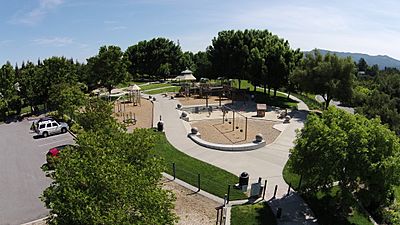 During the summer months a series of concerts are held at the park in the early evenings typically over a weekend. The concerts are organized by the Alamo Municipal Advisory Committee.

The park also typically hosts a children's Easter egg hunt each year on Easter Sunday. This is organized by the Rotary Club of Alamo.

Located at 180 Hemme Avenue, this 5.4 acre park features soccer and softball fields, playground structures and restroom facilities. Note that it is open to the public only after normal school hours.

Located at 100 Wilson Road, this 2.2 acre community park offers soccer and baseball fields, batting cages, two multi-use sport courts and a picnic and barbecue area. Note that it is open to the public only after school hours. 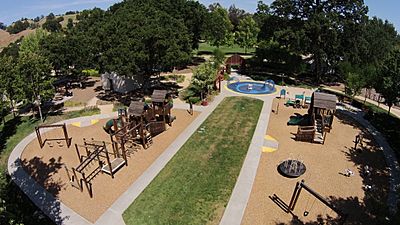 Aerial view of Hap Magee Ranch Park showing children's playground in the foreground, picnic area on the left and park area in the background

Located on the Alamo-Danville Border at 1025 La Gonda Way. This 16.3 acre park has several historic structures and is managed jointly by Alamo and Danville. A barn façade at the park entrance memorializes the park’s former use as a ranch for longhorn steer with the owner being Hap Magee during the years of 1953 and 1985.

Before the cattle ranch, the site was a summer camp for San Francisco orphans, known as Camp Swain. The property was purchased in 1874 by Captain Isaac and Ann Trasker Swain on behalf of an orphanage in San Francisco. The Swains thought the children should have a warm place to go during San Francisco's damp summers. In 1911 the San Francisco Protestant Orphanage first brought their children to Camp Swain. The orphans came to the valley from 1911 to 1952, using the train and then buses. There is a drinking fountain commemorating Camp Swain with a plaque and a brick rendering of children playing.

Today there are picnic facilities, children's water play area, a large meadow with a spectacular heritage oak, dog parks and off-street parking. The park sits near the intersection of the Iron Horse Trail and the Las Trampas to Mt. Diablo Regional Trail.

Las Trampas Regional Wilderness is a 5,342-acre (2,162-hectare) park located to the immediate southwest of the town. The wilderness contains numerous plant and animal communities, including forested hillsides and riparian woods. The park is also host to several secluded waterfalls, many of which are difficult to reach. 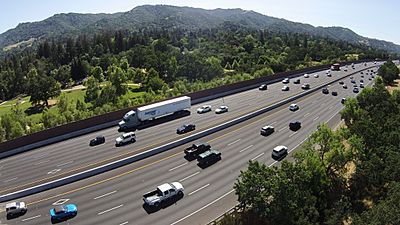 Interstate 680, running north-south, is the main highway serving the San Ramon Valley. It runs north through cities such as Walnut Creek and Concord, providing access to Wine Country, Sacramento and Lake Tahoe (accessible via Interstate 80). Going south, I-680 passes through cities including Pleasanton and Fremont, ultimately reaching San Jose.

State Highway 24, which intersects I-680 in adjacent Walnut Creek, provides access to San Francisco, Oakland and Berkeley via the Caldecott Tunnel running under the Berkeley Hills.

Bay Area Rapid Transit, or BART, offers rapid transit service throughout much of the Bay Area. The Walnut Creek station, the station closest to Alamo, is on the Pittsburg/Bay Point–SFO/Millbrae line, which runs to San Francisco and beyond to San Francisco International Airport.

County Connection's routes 21 and 321, running on weekdays and weekends respectively, provide local bus service along Danville Boulevard in Alamo, south to Danville and San Ramon and north to Walnut Creek, terminating at the BART station.

The Mount Diablo thrust fault runs through Alamo releasing small tremors about every other month. The fault line has never had a history of being dangerous. However, the Hayward Fault, a close neighbor, is extremely active.

There were 5,406 households out of which 40.1% had children under the age of 18 living with them, 78.1% were married couples living together, 4.4% had a female householder with no husband present, and 15.4% were non-families. 11.5% of all households were made up of individuals and 5.2% had someone living alone who was 65 years of age or older. The average household size was 2.87 and the average family size was 3.10.

All content from Kiddle encyclopedia articles (including the article images and facts) can be freely used under Attribution-ShareAlike license, unless stated otherwise. Cite this article:
Alamo, California Facts for Kids. Kiddle Encyclopedia.